After hauling my stuff up to NY (via Philly for Phish show #1), unloading, returning the UHaul, enduring a 3+ hour ordeal at the DMV to get an "in-transit" permit for the road trip chariot, enjoying some sushi with Mom & Dad / Aunt Carol & Uncle Larry, getting a decent night's sleep, and consuming the obligatory (and delicious) NY bagels and lox, we were finally ready to get on the road around 10:30am.

Our objective was to get to my good friend Erin Bowser's lake house a bit north of Columbus, OH.  Bowser surprised me last week by showing up to my DC going away party, and when we launched this plan Google Maps told us that it was 6 hrs 20 mins from my parents' place on Long Island to her house.  Somehow when Mei-Wah expressed skepticism about that and I went to confirm the night before we were to leave, the trip was now 9-10 hrs.  And, when Missy agreed to come on this trip she had only one firm condition: she didn't want to drive more than 4-5 hours each day--understandably she wanted to spend more time out of the car than in it.

So, I had the pleasure of launching our trip by readjusting Missy's expectations about our first day's drive.  She took it in stride, and we got on the road.

About 10.5 hrs later--through NY, PA, and part of OH--we arrived at Bowser's house on Charles Mill Lake in Lucas, Ohio.  Here I am with Bowser. 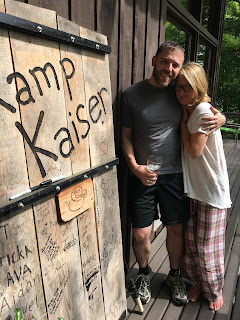 Missy, Bowser, and me on the porch overlooking the lake. 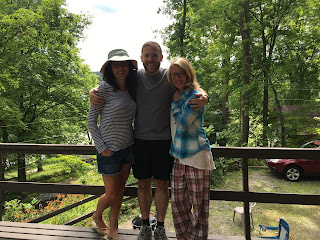 Bowser shares the place with her brother Richie.  They have a boat to fish out on the lake.  We had a great time staying up until 3:30 am (well I did) with Bowser, Richie, his gf Jen, and Bowser's high school friend Janine.  We were also surrounded by delightful kids and two, Aden (Janine's son) and Riley (Richie's daughter) stayed up late hanging out with us around the bonfire.

And, here's the toaster's first appearance. 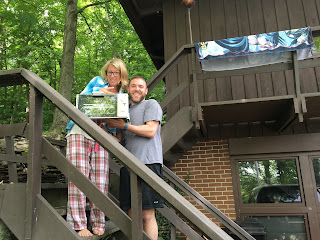 Inexcusably we didn't get pics of the rest of our crew.  We were sorry we couldn't stay longer to go out on the boat and share more food, beer, and good times...but time is short and the road beckons...

Heading West to "go see about a girl"...with a toaster

I'm restarting my long-retired travel blog to document my road trip moving from DC to Berkeley to go live with my partner Mei-Wah, who is a rising 2L at BerkeleyLaw.

The older posts on this blog are all about my 6.5 month solo trip through Latin America after I graduated from law school in 2007.  It may be the most interesting thing I've ever done, so definitely scroll through and check out some of the posts...I swear I was taking pictures of all my food before it was cool.

A bit of context for this trip.

First, I'm moving for love.  Mei-Wah and I met while we were both in DC and after dating for about 1.5 years she headed West for law school.  We did the long distance thing for a year and now it's time for me to step up, dive in, and put someone else ahead of myself for a change.  And, I'm really excited to do it.

Second, I have the great fortune of making the trip with my cousin Missy who is launching a year off with this joint adventure.  We're the same age but grew up in different cities, so we've hung out sporadically over the years but have never spent this much concentrated time together.  We both have our quirks--and opposite taste in music--but we're looking forward to catching up.  And I'm very grateful for the company.  This trip will be a ton more fun with a partner in crime.

Third, we have 13 days to make it across America.  This is because our trip is bookended by Phish shows.  On one end was the show in Philly with Kevin and the other end are two shows at the Gorge outside of Seattle (my happy place) followed by three shows in San Fran and potentially a seventh down in LA with my brother.

Fourth: the toaster.  My dear mother asked us to bring my brother a toaster oven.  Missy and I find this interesting for two main reasons.  First, a toaster oven costs about $30 these days, so it's not clear it really makes sense to lug one 3K miles across the country.  Second, we are going to Berkeley.  My brother lives in Irvine, which is south of LA.  So, either my brother will have to come up to the Bay Area to pick up the toaster or I'll have to bring it down to him at some point.  Now that may happen soon enough if I hit the Phish show with him as planned...but the whole things seems a bit excessive.  And, kind of hilarious...which is why you'll see plenty of toaster-themed pics throughout this blog.

Ok, on to the adventure.  I'm actually writing this from the car in Minnesota (the wonders of iPhone hotspots) but I'll try to catch everyone up in the next few posts.

Oh, and here's our chariot for the trip: my dad's Subaru Forrester, which he generously gifted me knowing that my prior car (a 1997 Outback) might not make it all the way to CA.  Thanks Mom & Dad--you've given me so much in life and this is only the latest example.  [They are also helpfully storing my mattress & box spring in their garage and a bunch of boxes in their attack.  I really appreciate that.] 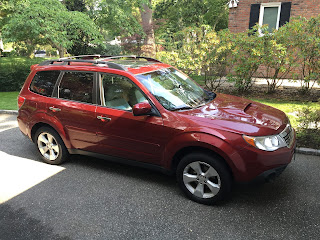 Finally, a word about our plan.  We have just under two weeks to get from New York to Berkeley so I can spend a night or two with Mei-Wah before heading up to the Gorge.  To plan the trip I pulled up two essential tools: Google Maps and my friends Ryan and Christina's honeymoon travel blog.  They traveled for a year around the world for their honeymoon, including hitting 35 national parks here in the U.S.  Missy and I wanted to combine seeing national parks with visiting friends and finding free places to stay.  Hence the route to come...
Posted by arl at 12:47 PM No comments: