I hesitate to claim that this section accurately represents the typical food of Bolivia because unlike in other countries I didn't have much advice from locals. I also didn't eat many sit-down meals, preferring to try my luck on the streets. So, this is really just what I encountered along the way.

Seafood
The only real sit-down meal that I had in Bolivia that qualifies as "comida tipica" is fresh trout from Lake Titikaka. I've never really had trout before and I can say that when fresh it's incredible. I had some later on in Cuzco that was not as fresh and not nearly as good (I want to describe it as "fishy" although that strikes me as an exceedingly strange way to disparage fish).
Here's a pic of my trucha de ajo, or trout fried with garlic. It was absolutely delicious--one of the best meals I've head on my trip. 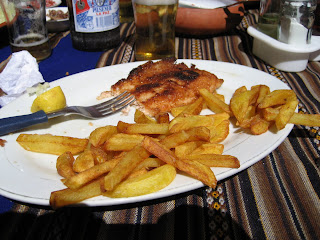 Street Food
Pretty much the rest of what I ate in Bolivia came from the street. The street food in La Paz in particular was plentiful and cheap--and luckily I had a willing partner in crime in Dennis (Natalie and Lexi were less enthusiastic). 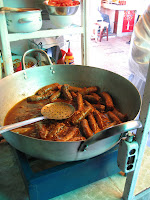 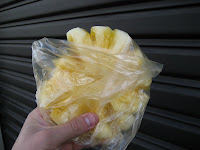 Here's some pinapple and chorizo bought on the street and at a stand respectively. 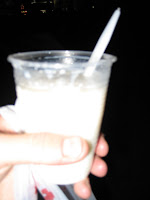 This was probably my most adventurous piece of street eating to date in Latin America. I know it's pork, but that's about it. There appear to be ears in there: 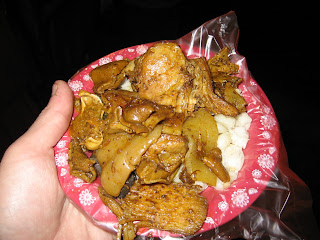 Here's the bowl it came from: 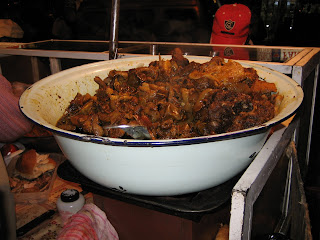 I ate several times at these identical stands all serving exactly the same thing. Here's the dude cookin' up the shit: 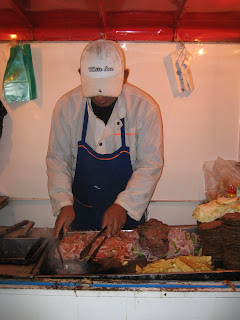 Here's a close-up of what's on offer, basically burgers or carne with or without fried egg, french fries, onions, and peppers--you know, health food: 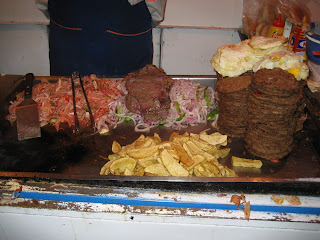 Here's the dude serving me up a sandwich: 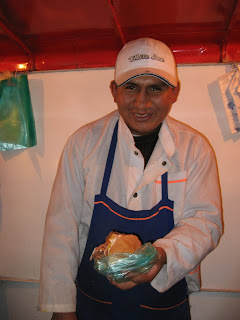 And, here's what my meal actually looks like (you gotta buy the cold Coke from a different stand, but it's worth the 10 step trip): 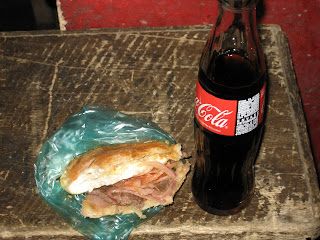 Hello! Sorry about my english, but i wanted just to say you that you have miss in La Paz- Bolivia to taste tipical food such as Hispis (made of small fishes)served with chuno(the white one is from La Paz contrary to other parts in Bolivia they are black) and corn.Then, of course envery Bolivian departments possess their own typical food, so there are many. I think not many time to taste all of them.