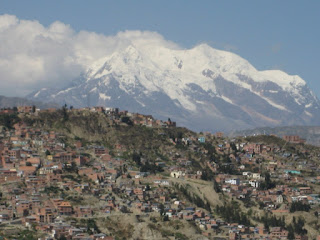 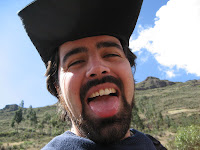 From Uyuni, I caught a bus northwest to La Paz, the capital city, with my new friend Dennis from the 4x4 tour (on the right).

We had heard all kinds of scary things about Bolivian buses--mainly that they are freezing cold and don't have bathrooms, so bring a blanket and a piss bottle--so we were sure to ask lots of questions at the bus station before we began our 12+ overnight journey.
We were told that we would be changing buses in a town called Oruru, 15 MINUTES away and that our new bus would have a bathroom and comfortable seats.

We boarded the bus armed with whisky, water, snacks, and (of course) a piss bottle. As we got underway, we quickly realized that given the incredible bumpiness of the unpaved Bolivian roads, pissing in a small bottle was not a realistic option. We had to hope our next bus would truly have a bathroom as advertised.
As we rolled passed the twenty-minute mark without stopping, we began to wonder. Then 30 minutes; 45 minutes. There were two gringo women sitting behind us, so I turned and asked them if they were going to La Paz. Yes. Did they know anything about changing buses after 15 mintutes in Oruru? No. They hadn't been told anything about changing buses.

Well, not really. Sure enough, 8 HOURS after leaving Uyuni, we arrived in Oruru and had to change buses. The women behind us were sleeping and had no idea. Had we not woken them up, it's not clear if they would have made the switch.

LESSON: Even when you ask all the right questions, you MUST be on your guard when traveling in Bolivia. You can never be sure you're being told the truth and it is usually fellow passengers, not official bus employees, that will give you the best info about changes, etc.

The Markets, I Mean Streets

La Paz is the most frenetic, chaotic city I've ever seen. The streets constantly sound of honking horns and people yelling out of the side of microbuses advertising their route and price.

Half of the economy seems to consist of people selling every manner of thing in stands or simply sitting on the street. Old women dressed in traditional clothing (a bowler hat and dress) are hawking everything imaginable and cooking full meals on the street.

They are all dressed alike and almost universally fairly large. I think this is because they spend pretty much all day sitting in the street surrounded by their wares and eating. I swear, it's almost impossible to catch these women NOT eating.

These women really do not like having their picture taken, so I stuck to subtle, far-away shots of street life: 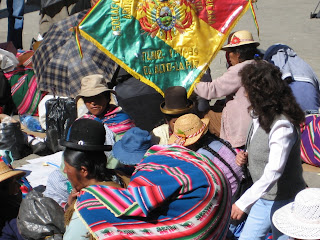 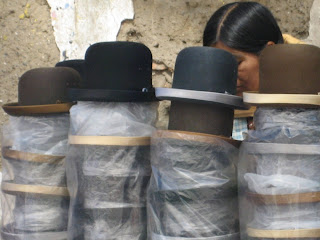 The city is a shopper's paradise with everything available cheap--and a great spot for street eating. Walk around at 10pm on any weeknight and the open market is in full swing. I got lots of gifts for family there--mostly alpaca goods that are costly in the states but cheaper than I'd like to admit in La Paz.

Here are some more images of the street: 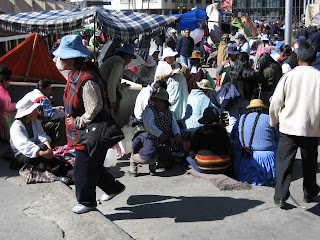 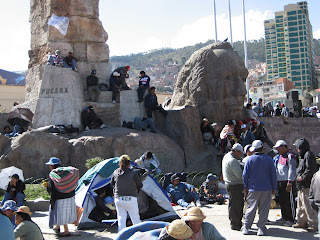 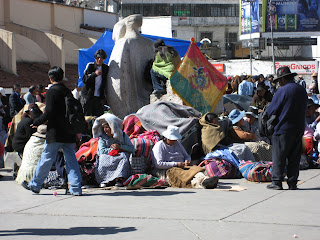 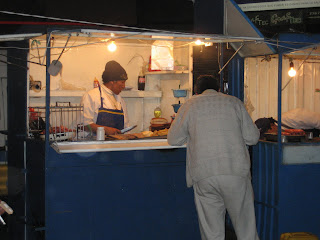 One thing I've found curious about Bolivia is that there are about 15 of the stands pictured above right next to each other--and they all sell EXACTLY the same food. No variety. Weird. This was similar in other places. The city nearest Machu Picchu, for example, has dozens of restaurants and as far as I could tell, 90% of them were bar/pizzarias offering the same drink specials and lousy pizza.

Another fixture on the streets of La Paz are the shoeshiners. These are often young men, but sometimes older as well. They all wear masks. This is not because it's cold. Unfortunately, it's because their job is considered shameful. Don't worry, I had permission to take a picture of this guy (it cost me just as much as getting my shoes shined--about 14 cents). 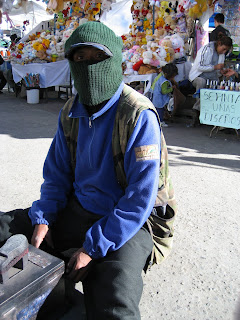 The View
As mentioned in the title of this post, La Paz is the capital city at the highest elevation in the world--3,600 meters. Interestingly, the capital in Bolivia is actually split, with the legislative and executive functions based in La Paz but the Supreme Court based in Sucre to the east. Anyway, here are some images of the city, situated within a snow-capped mountain range: 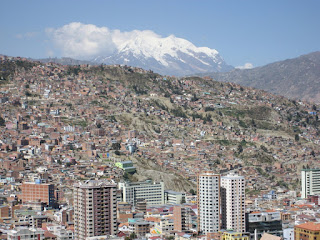 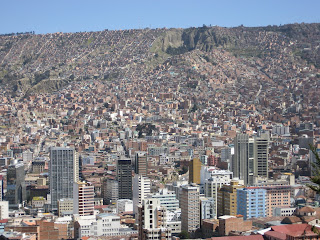 Our Hostels
For anyone planning to go to La Paz (and if you're in Latin America, you shouldn't miss it), we stayed in two hostels. The first was called Arthy's. It was very clean, has a great TV room and DVD library, and the staff was great (thanks again to Olivia for the rec.). The only problem was that it has a midnight curfew--not a place to be if you want to party.

After chilling for a couple of days we decided we'd want to experience La Paz's night life so we switched to the Adventure Brew hostel which advertises a free mug of their home-brewed beer each night. The beer wasn't that good (the dark is decent, the light nearly undrinkable) but it's a fun enough place to stay. Folks would gather at the upstairs bar each night and head out from there. Dennis and I had a couple of memorable nights out which y'all are free to ask me about offline.
Posted by arl at 3:45 PM