Although sad to leave our new friends in Montanitas, Dave and I piled into a bus on Sunday, bound for Banos--a resort town in central Ecuador known for its thermal baths, spas, and surrounding scenery.

But, first we had to go through Guayaquil, so after about 9 hours on the bus we ended up spending the night in Riobamba, a small, nondescript city. After a good night´s sleep, exploring the town for about two hours, and grabbing some lunch, we were off to Banos, arriving in time to find a good hostel and get some dinner.

Banos is a small city wedged between mountains. It sits 1820 meters above sea level and directly below the 5023 meter, active Tungurahua Volcano.

In 1999 the town was evacuated because of an eruption alert (orange), but no eruption came and the villagers fought their way back in, fearing that soldiers were looting their property.

Following the local protests, the state downgraded to the alert level to yellow and allowed folks back in¨against official advice.¨ The town now stands on yellow alert, but the rest of the region remains on orange--meaning an eruption can take place within days or weeks.

Banos is very touristy (dominated by hotels, hostels, spas, and restaurants), but fairly charming as well. Here are some shots depicting how nicely the town sits within the surrounding mountains. 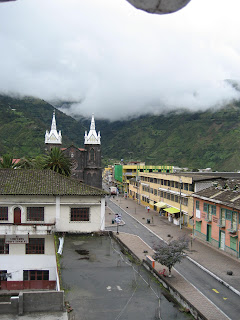 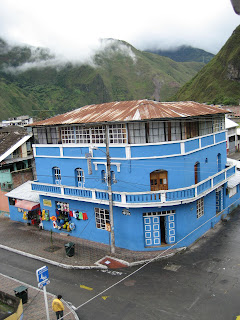 When the church is lit up at night it looks just like the castle in Disney World. I wish I got a night shot, but here it is during the day. 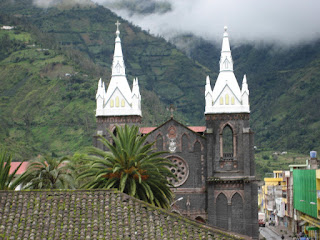 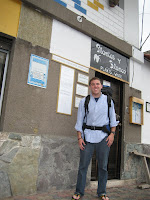 We found a great hostel called Plantas y Blanco, which strangely translates as ¨Plants and White.¨

Upstairs was a great cafe and a special sauna treatment. They put you in a steam box with only your head sticking out and roast you, and then take you out and splash you with cold water. This procedue is repeated 5 times. It feels sort of good, and I guess it´s supposed to open your pores.

Here Dave and I are in our steam boxes: 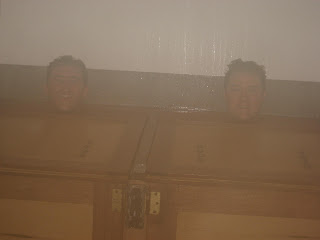 And here I am getting hosed down with cold water. 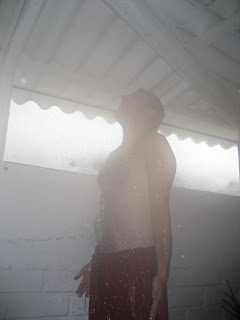 Finally, here I am with the dude who was in charge of the torture, I mean procedure. Notice the cool view out the back window. 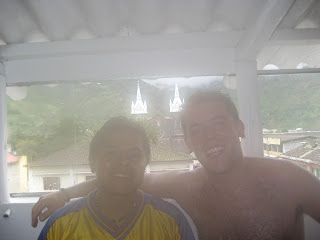 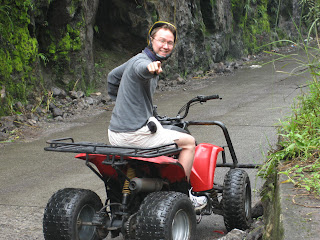 Our first full day in Banos was quite an adventure. We started off by renting four-wheelers to head down the road out of town towards Puyo. These suckers were fun to ride, although probably terrible for the environment. Dave and I both had twinges of guilt as we realized how loud and fuel-guzzling they were. Nonetheless, we sucked it up, forced ourselves to have fun, and repented later on.

Along the way, we saw some spectacular scenery, including some very cool waterfalls. 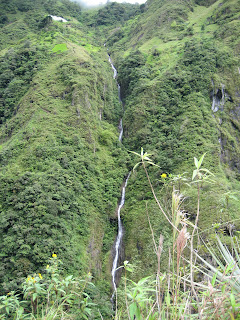 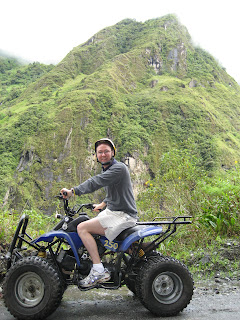 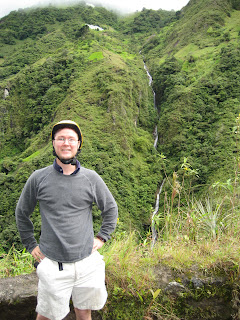 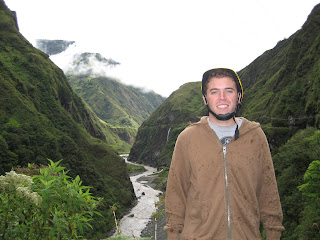 Eventually, we came to a point we couldn´t pass on the cuadrones. Here´s some video Dave took of me trying to drive over and then deciding it was not a good idea.

A few meters behind this point was a cuadrone stuck in some deep mud with no driver in site (you can see it on the right in the video). As we were turning ourselves around, a twenty-something guy emerged from around the corner and asked if we´d help him get his 4x4 out.

We were on the clock with our own rentals and not excited about getting covered in mud, but travel´s code requires helping another in need, so we set to work. Unfortunately I had camera problems here, so no pictures. But, after about 20 minutes and Dave wrenching his back we were able to pull his vehicle out by tying it to the back of mine.

In the meantime, we had learned our new friend was from Texas and spoke excellent Spanish. As we were parting ways, he thanked us, saying it was a good thing we got the vehicle out of the mud because he was afraid they would have really ¨jewed¨him at the rental place if they had to come out and get it themselves.

Shocked and speechless (yes, it´s possible for me), Dave and I just walked away. Of course only after another minute did I realize that I should have told him that he should be careful what he says since a Jew just helped him out of the mud.

Later, we were talking about how he could possible think it was OK to say that to two strangers he met in Ecuador. My leading theory is that he probably wouldn´t think he was being malicious--it was likely just an expression he was brought up with which means ¨being ripped off or treated overly aggressively in relation to money.¨ Plenty of folks still use the expression to get ¨gypped¨in a similar way without even realizing that it clearly originates from a stereotype about Gypsies. I even find myself saying it very occasionally even though I know better.

Oh, well...a missed opportunity to educate a wayward Texan. Good thing we´ll soon be rid of the most wayward Texan of them all... 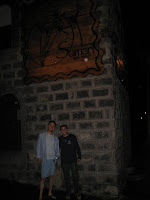 After our 4x4 adventure, we headed to a beautiful spa called Samari to get thoroughly pampered in a spectacular setting. For $72 (plus taxes and tip which made it closer to $100, but oh, well) we got 3.5 hours of treatments including a 70 minute massage, getting painted by mud followed by a hot floral bath, my first ever facial, and some time in a sauna and steam room. This would probably cost $300-400 in the U.S.


Here´s a shot of Samari´s grounds, nestled under a mountain: 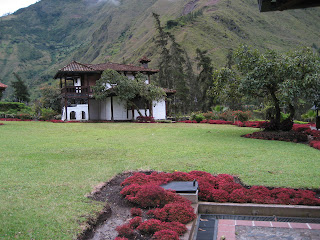 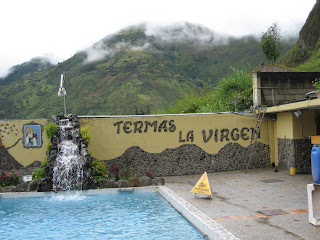 The next day we got another massage (just one hour this time) and then headed for the famous thermal baths that give Banos its name. We chose the bath of the Virgen because it was recommended in the guidebook and sits right beneath a waterfall. 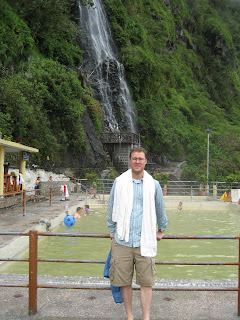 It was pretty nice--and supposedly good for one´s health.


Feasting on the Way Out

Before hopping on a bus to Tena, where we planned to head into the jungle, we decided to have a last feast at Cafe Hood--a cool, homey joint with surprisingly good food. By this point, Dave--who was enamoured of the low prices on food throughout Ecuador--had developed a habit of significantly over-ordering at nearly every meal.

This may have been the peak. Notice the not one, but two sides of guacamole (ordered without my knowledge). 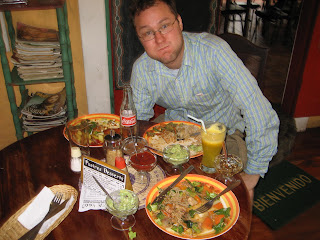 Our two days and nights in Banos were fun and relaxing. Dave was starting to wind down from the stress of work and losing his passport (and camera, but that actually didn´t seem to stress him out at all) and was recovered from the strep throat he had developed during the passport fiasco. We were ready for the jungle...
Posted by arl at 3:43 PM

Your video didn't get embedded. But take a look at this one: http://www.youtube.com/watch?v=6CHDOrhEqGI