OK, I hope someone other than Adam Hollander enjoys this section--oh, what the hell, I don´t care; I like it. So, here goes, another edition of the only regular installment on El Gringo y El Gallo:


Here´s a rundown on the food we were served when Dave and I spent a few days in the jungle with the Quichwa community of Rio Blanco.

First of all, we got soup with every lunch and dinner. Here are a couple of types. The first is sopa de quinoa con yuca: 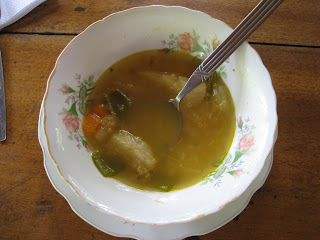 Next is masamora de verde, which is the most typical soup of the Quichwa: 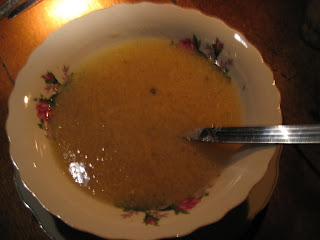 For our first lunch, we were served a delicious fried talapia with fried yuca, beans, rice, and salad: 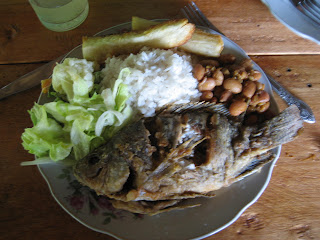 For dinner, we had palmita (heart of palm), which is one of the tastiest vegetables I´ve ever had: 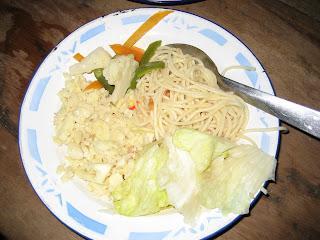 This fish is called chuti in Quichwa. We tasted the babies fried. (That´s Pasquel, el profesor, holding it and Monica and Maxi in the background.) 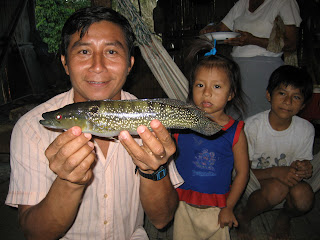 Our last dinner was a delicious dish of leaves stuffed with hart of palm and chicken (ojas con palmito y pollo). This was truly fantastic--again, I never thought vegetables could have so much flavor. 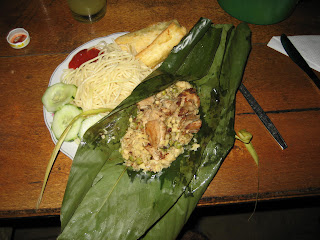 And, for our last lunch, we had chicken with rice and--of course--more yuca. 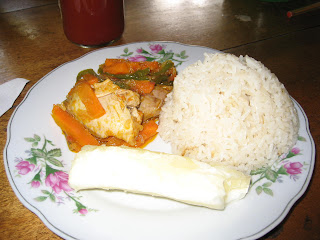 Finally, last but certainly not least, is chicha, the beer of the jungle. To make chicha, the Quichwa boil yuca for 15 minutes, mash it, mix it with some old chicha, and then put it in a bucket to ferment overnight. Here is what it looks like in its traditional container: 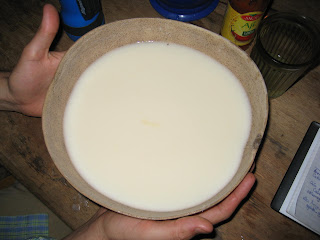 And here I am partaking (not one to turn up my nose at local culture): 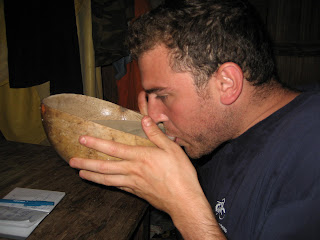 Interestingly, the Quichwa often drink weak chicha for breakfast. The stronger stuff is saved for fiestas.

I have to say that overall I was blown away by how good the food was. I wasn´t expecting all that much, but each meal was hearty and flavorful, complete with soup, a main course, and bananas for desert. I was always satisfied and never hungry after any meal.

As you all know by now, I love street food. Due to Dave`s reluctance to get sick on his short vacation, I didn´t indulge in as much of it in Ecuador as I would have liked. But here´s what I did get around to.

First, here is Edgar who runs a late night food stand (open ´till 4am) near the Tena bus station. He´s digging into a plate of cow intestines, which he let me try for free (Dave even had to try it against his better judgment b/c it would have been rude to turn down the offer): 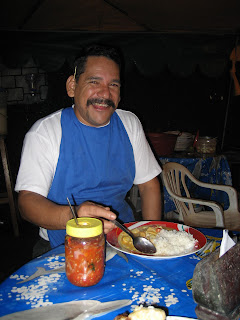 Next we have a chicken skewer I bought on the bus. People are always coming onto the buses hawking every imaginable thing. So, I guess this is technically ¨motor vehicle food¨rather than street food...but I think the idea is the same. 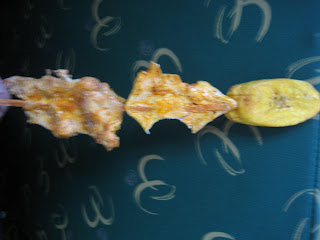 Finally, this was technically sold out of a restuarant, but I think $1 shwarma qualifies as street food purely on principle. These were great and I think I ate 4-5 of them in two days while I was in Quito. 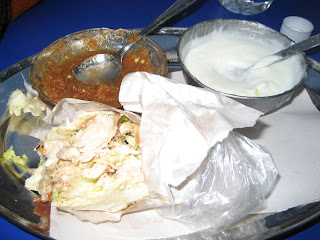 Every once in a while I break down and patronize an establishment with a roof and maybe even a health code certification.

Here is some shrimp ceviche I got my first night in Quayaquil: 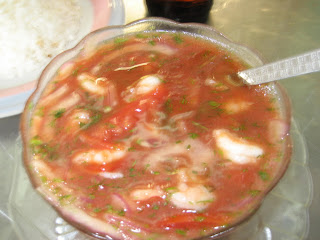 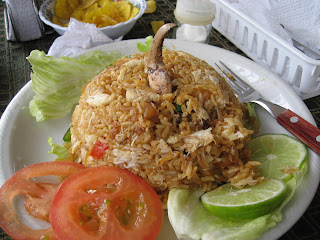 And, this is Wilo´s (our Quichwa guide) favorite dish, ordered from a restaurant called Safari in Tena. It´s called chaulafun, a mix of chicken and shrimp with rice--and it´s quite delicious. 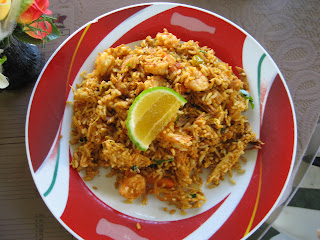 Dave thought the food in Ecuador overall was unremarkable. I´d tend to agree. There was all the usual fast food fare (pizza is as popular in Latin America as the States), and the stuff we got in restaurants was usually solid but not outstanding. The biggest pleasant surprise was the food we were served in the jungle.

Hey, while searching for widgets for my blog, I stumbled upon www.widgetmate.com and wow! I found what I wanted. A cool news widget. My blog is now showing latest news with title, description and images. Took just few minutes to add. Awesome!

hello I am from ecuador.
But some dishes I can not eat like Cuy and all the stuff of the cow like ubre,lengua,etc

Hey,
I'm from Ecuador too.
Did you try Cuy?
I don't like it but was wondering what you thought.
Also, did you try caldo de salchicha? (blood soup)
I can't wait to go back and eat.
It's hard to find ecuadorian food here.

Hola, vi tu blog y me encanto. It certainly brings back a lot of memories. Ecuador is beautiful!! I'm from Cuenca, living in Florida for over 30 years and I'm surprise you didn't stop by. Cuenca is known for its architectual on its historical buildings, people and wonderful food. I still remember when my grandmother used to cook, cuys, humitas/chumales,tamales, guaguas de pan, guatita(the cow intestines you mentioned), the mote that doesn't fail with every dish, just mentioning my mouth gets watering, wow!!! thanks for visiting my beloved country, you were lucky on getting to know at least a little piece of Ecuador, unfortunately, I have not being able to come back, but before I die, I will.

Nice post… Thanks for sharing your such a nice person!…

Well love don't know where your friend and you ate but Ecuadorian food is the best I have had and I have been around the world. I found the Amazonian food horrible but that was my experience. The food of the Andes and Guayaquil not Quayaquil is out of this world. Sorry you missed the best part. I had a drink called Mansanilla OMG there is nothing like it. Boy do you need to go back. TY for the interesting read.

123.hp.com/setup configuration of HP printers. We offer resources released by 2019 such as drivers, software & the 123.hp.com/setupPrinter setup manual.

Visit canon.com/ijsetup to download and install the best-suited canon printer drivers and software for your specific printer by entering model number.

Get instant HP support for all your needs including 123.hp.com/setup help, install setup, download driver, and troubleshooting for all models of HP printers across all platforms Windows, Mac and Smartphone visit 123.hp.com/setup for help.

The Amazon platform allows you to watch the latest streaming via amazon.com/mytv. It is one of the global accessed platforms that is now becoming a competition to Netflix and similarly offers the TV shows and movies to watch your favorite content on the internet-connected devices.

How do I get a Roblox promotional code? You may receive a Roblox promo code from roblox promos code one of our many events or giveaways. Valid codes will earn you a virtual.