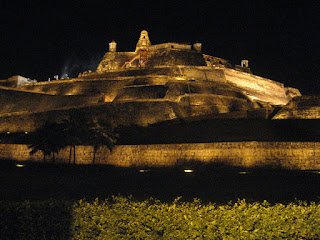 A Bit of Bad Luck

On my last day in Medellin, I faced a strategic question--fly or take a 13 hour bus to Cartagena? The plane would cost sigificantly more, but would allow me to get in with time to go out Saturday night--and I was supposed to meet up with some women I had met in Bogota. It would also allow me to avoid getting up super early or being on a bus at night, which in Colombia can present safety issues.

I ended up opting for the plane, figuring that at this point in my trip time was more precious than money. It was a mistake. I arrived in Cartagena on Saturday afternoon to discover that the whole town was shut down (no alcohol sold) because there were elections the next day for mayor. Ironically, I think this law makes sense and it´s much better that they have elections on Sundays than on Tuesdays like us--it just happened to suck for me right then.

Nevertheless, I met some cool folks at the hostel and set out to explore the city. Cartagena derives is particular charm from its colonial architecture and the barricades that surround the old city. In the 1500s, Cartagena was a frequent target for attacks by the British and pirates--that´s right real live pirates; one once held the entire city under seige for 100 days before leaving with a hefty ransom. The Spanish responded by building big, thick walls with cannons. They are surprisingly beautiful when lit up at night.

Here are Sebastian and Aurora, my exploring partners, in front of the main clocktower. 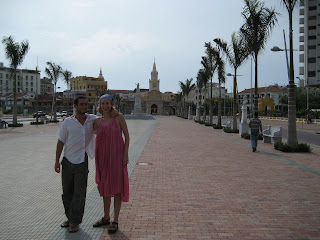 Here´s the same clocktower at night: 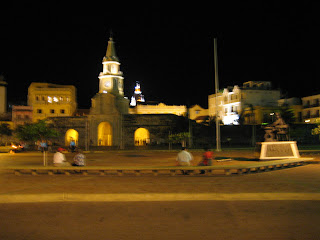 Here´s the Plaza de las Coches (where you can rent a carriage for a romantic evening stroll) by day and by night: 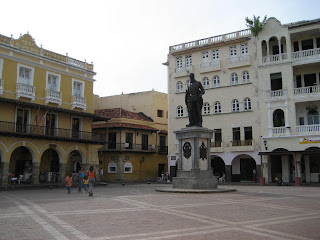 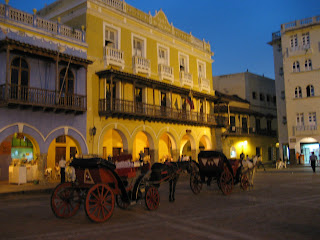 And here are some more day and night city shots. 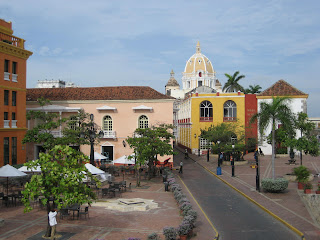 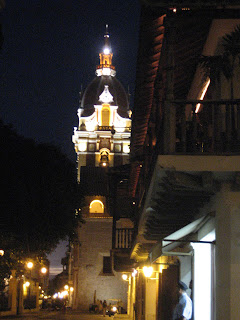 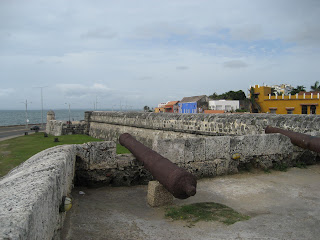 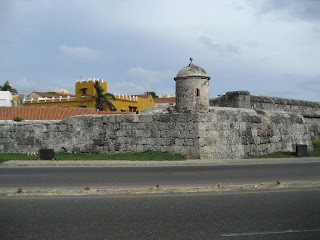 Hanging out on the walls at night with Carlos and a bottle of Aguardiente, the national Colombian liquor, which tastes like licorice or Sambuca. As I´ve mentioned before, you can legally drink anywhere in Colombia, which is great for hanging out in parks and the street. 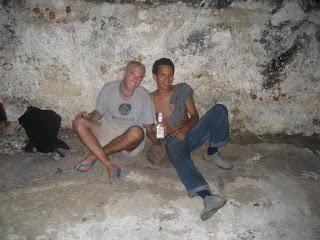 Here´s a shot of a great dance performance I caught on the street. I have some video of this that I´ll put up eventually: 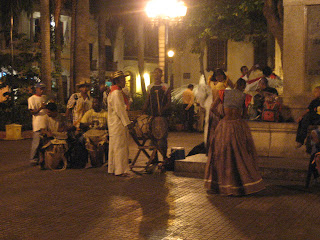 This fortress is not inside the walled city, but it is especially beautiful when lit up at night: 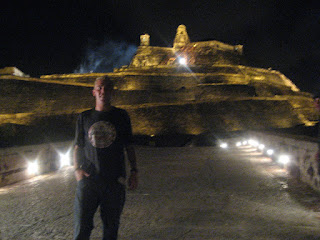 On Monday morning, Aurora and I took a boat to Playa Blanca, an island about 45 minutes off the coast. Through some combination of misunderstanding and prevarication (it´s never quite clear), it took us all morning to get there as we were shuttled to various islands where we were given the opportunity to pay for all kinds of stuff.

The beach was beautiful and the only civilization was a string of places offering fried fish and/or a hammock for the night. I wish I had brought some supplies because food and drink were a bit pricey. I didn´t even have enough pesos to get me through the two nights I planned to stay (and there was no electricity let alone ATM on the beach--although there are three towns inland). Luckily I found a French hostel owner who accepted dollars (at a crappy exchange rate) and I started a tab with him.

The only problem was an endless stream of vendors on the beach peddling cheap trinkets and massages. A local woman told me that tourism is down significantly in the past few years because Colombians are sick of the constant harassment on the beach. Overall, I found this a minor annoyance.

Here´s a shot of my ¨room¨(a thin matress on the sand with a mosquito net) at Mamo Ruth´s on the beach: 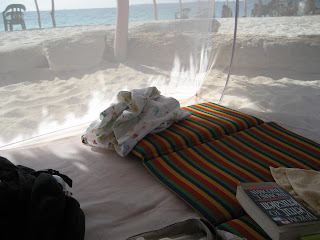 The views out my front door: 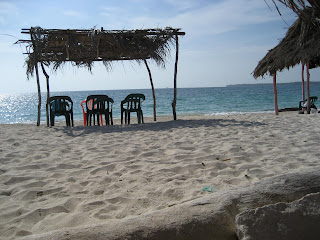 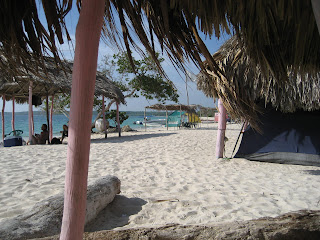 And, a sunset over the Caribbean Sea: 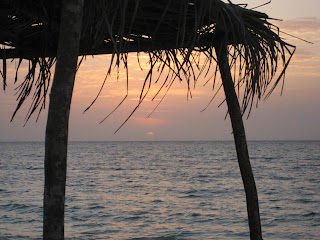 There wasn´t much to do on the island except chill out--and read a lot. The first night, there was some singing and dancing around a campfire with about 20 people.

After heading off to Playa Blanca and Parque Tayrona (next post), I returned to Cartagena for two nights. The first night I hung out on the walls with a few Colombians. Here I am getting a free fake tatoo from Alejandro (in exhange for taking pictures to post on his website): 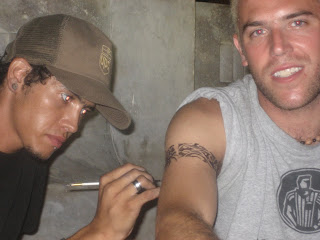 On my last night, I signed up for a party busride. They take you through some of the sights and give you unlimited rum while playing traditional music. I ended up with a group of urban planners from all over Latin America who were attending a conference, but it was pretty fun. Latin American 40 year olds are much more fun than their contemporaries from the U.S. 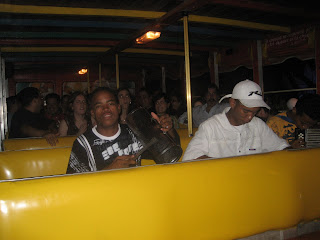 After the party bus I met up with a group of folks to head to the clubs. Unfortunately it was Wednesday night and there wasn´t much partying going on. Nonetheless, I ended up staying up to see the sun rise on the beach in the Boca Grande section of town (the other major part of Cartagena outside the walled city), with more Aguadiente. 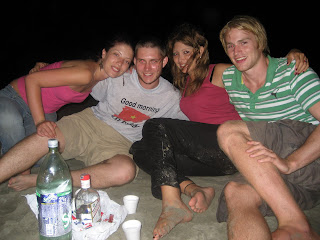 A Note on Where to Stay

There were plenty of affordable places to stay in the Getsemani neighborhood just outside the Walled City. This neighborhood is reputed to be dangerous and walking around alone at night is not a great idea, but I never felt threatened. Casa Viena is the central gringo hostel, but it was filled up every time I tried to stay there (three separate times). On the same street, Hotel Familiar and another one right across the street offer private rooms for around $7.50.

Cartagena was by far my least favorite place in Colombia. For a variety of reasons, it just wasn´t ¨tranquilo.¨

First of all, there were cops and military everywhere--which was nice from a a safety point of view, but definitely didn´t contribute to a chill vibe. Plus, I´d heard stories of cops planting coke on gringos in order to extort bribes--the general consensus in Colombia is that you can never be sure the police are on your side.

Second, I always felt like I had a big scarlet G (for gringo) on my back whenever I walked around. Everyone was trying to make a buck off of me--selling me this useless trinket, or getting me to come to their club so they could push drugs and prostitutes on me, etc., etc. I even felt as though some of the folks I was hanging out with were more interested in getting me to pay for the next round of drinks than in me as a person.

The reality is that I do have more money than folks who live here, and I understand the need to make a buck off of tourists. But, I really didn´t appreciate the style of a lot of folks here. One guy named Joseph (watch out for him if you come to town) even had the nerve to tell me how we were friends and I was letting him down by not buying expensive drinks and cocaine in his bar--I mean give me a fucking break.

Finally, I definitely didn´t have the best of luck. As I mentioned at the top, the town was closed down when I arrived. My last night in town I was all ready for a big night and met up with some folks after the drinking bus, but it was a Wed and all the clubs were empty (at least those that were reasonably priced enough for our group).

So, I know a lot of people love Cartagena, and I´m sure I could have had a completely different experience on a different trip. But, it didn´t work out that well for me.
Posted by arl at 11:32 AM

say what's up to mama ruth and chamaco

Sounds like your life style will keep you in that company whever you visit. It's not Cartagena's fault. Birds of a feather....

Good brief and this enter helped me alot in my college assignement. Thanks you as your information.

Good fill someone in on and this mail helped me alot in my college assignement. Thank you seeking your information.

This is a great info here. A few things here that I had not even heard of. Better, get reading more so good to have some fresh feeds to add.