Medellin is a pretty big city northwest of Bogota famous for two natives: Fernando Botero and Pablo Escobar. Until recently it was the murder capital of the world as Escobar´s cocaine empire fought with rival gangs on the streets. Now, however, the city is emerging from this period as a vibrant center of commerce and culture. The people from the Antioquia Provence, called ¨paisas,¨ are known throughout Colombia for their industriousness and work ethic.

Interestingly, Medellin is also the plastic surgery capital of Colombia, with many women coming from other provinces and countries for ¨augmentation.¨


My Digs
Ana`s family´s generosity followed me to Medellin. It turns out there was an apartment available in a building owned by Luis´family and he offered me the chance to stay there. The building is in central Medellin, right across from the Plaza de Botero. It was somewhat shady at night--lots of prostitutes right outside--but a good base from which to operate. Here´s the building, called Edificio Aristizabal: 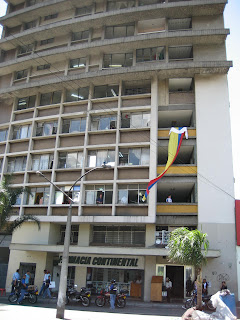 And here´s my apartment: 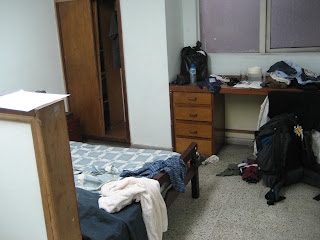 Here are some shots of central Medellin. Right near my place there was an open-air market that would run from mid-day to around 10pm. There were fruits, vegetables, fish, and even meals served complete right outside: 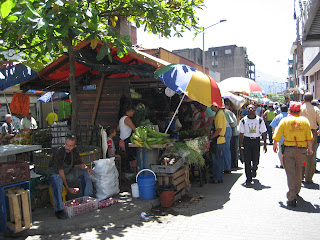 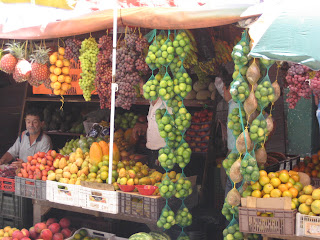 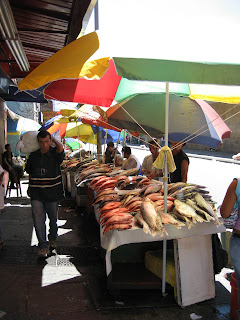 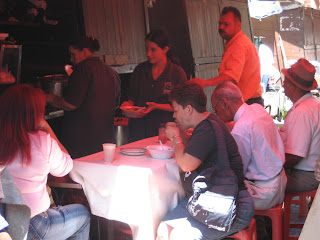 Right across from my building is a big plaza with a couple of museums and a whole bunch of Botero sculptures (Botero was born in Medellin): 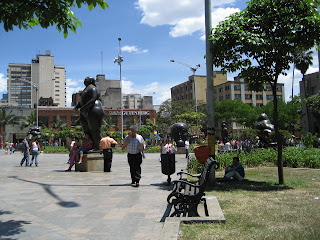 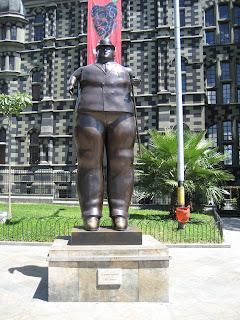 Around the corner is Plaza Bolivar: 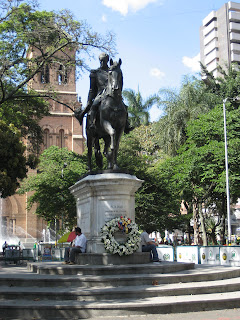 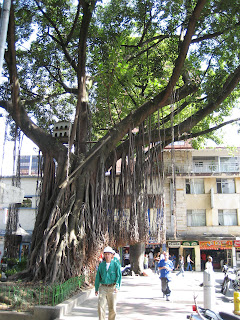 My Trip to the Countryside

One of the cool parts about staying in Ana´s family´s building was that the staff there really took me in. Grace, who seemed to be the building manager, sent me out to the country on the back of Carlos´motorcycle to see some of the surrounding towns.

Here´s Carlos with his bike: 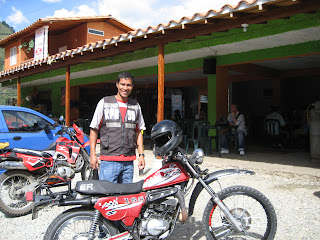 First, we stopped in the town of San Jeronimo to meet Carlos´family and see where he spends his weekends. Pretty much all the folks in this picture are Carlos´cousins and they all live together. Below is where his dad was hanging out. The property is beautiful and includes a river (in which I swam) and ripe mangos all over the place (which I ate). 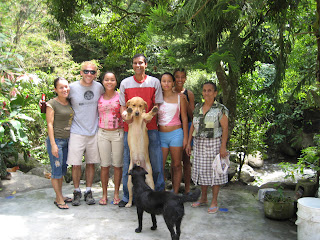 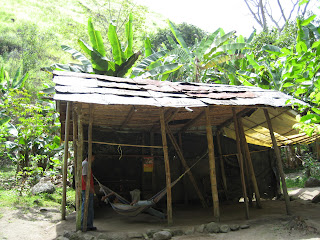 Next, we headed to the towns Sopetran and Santa Fe de Antioquia. Here´s a picture of the main church in Santa Fe. 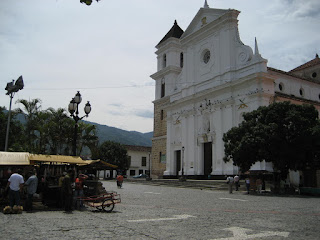 Along the way, we visited the historical Bridge of the West which connects Santa Fe with Medellin. It was built at the end of the 19th Century and declared a monument in 1987. 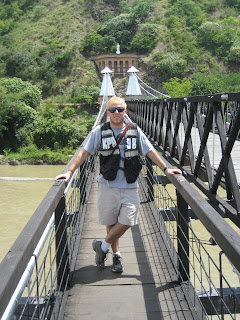 Again, I don´t have pictures of my nightlife in Medellin because I was being cautious. But, most of the nightlife for young people occurs in a somewhat posh suburb about 10 minutes south of central Medellin called El Poblado. There are two main parks, Parque Lleras and Parque Poblado, where people sit outside, drink beers, and generally hang out. Most of the bars and clubs surround these parks.

I met some cool folks from Casa Kiwi (the hostel I would have stayed at if I didn´t get the free apartment) and met up with some ¨amigos de amigos¨a couple of nights.

A few general thoughts on Medellin. First of all, the poverty was much more in my face than when I was in Bogota. This is probably a function of where I was staying. There were homeless and disabled folks all around, plenty of prostitutes, and--most disturbing--filthy kids sleeping in the streets.

Next, I was struck by how hard people seemed to be working for so little. One guy was on the street all day yelling every 5 seconds to sell little packets of gum. I don´t know how much he was charging, but it couldn´t have been more than five or so cents. Another guy was selling 12 tomates de arbol (type of fruit) for 1000 pesos, or 50 cents. Along with the guys who walk around with fists full of watches, these folks are busting their butts, but I just don´t understand how they can scrape together enough to make a living.

Finally, lots of travelers fall in love with Medellin and end up staying for weeks or months. [For one example, see my friend Robin´s travel blog at http://www.findrobin.blogspot.com/.] This didn´t happen to me, but I think it was at least in part because I didn´t have the time to get into the rhythm of the city. I only had three full days there and was only able to hang out with each of the people I met there once. I can see how with more time, it would be a cool place to hang for a while.

Could you please contact me? I am looking for a way to contact Dario Aristizabal, and I see that you stayed in the Edificio Aristizabal. I was a friend of his in the early 1970's when I went to live in Medellin 1972-1976. Pelase email me at carolgarzatexas@yahoo.com if you can help at all.
I enjoyed reading your blog!
Thanks,
Carol