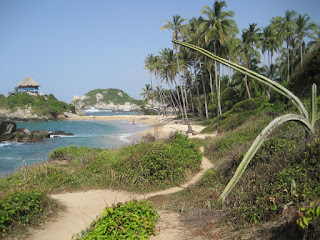 On Thursday afternoon, I took a bus from Cartagena to Santa Marta, which borders Parque Tayrona, famous for its combination of jungle and beach. The bus company guy told me it was 3.5 hours direct. It took more than six hours and I had to change buses.
I´m getting sick of being straight up lied to. Sometimes it doesn´t matter how many precise questions you ask--they´ll just tell you what they think you want to hear (I imagine this applies double to gringos).
But, I arrived in Santa Marta in time to get a hostel, meet some folks, and head out for a fun night at the popular bar La Puerta. The experience simply reinforced the importance of my only hard and fast rule for traveling in Latin America: Thou shalt not be in a hurry. As long as you´re not trying to get to a particular place at a particular time, all is well. If you are, you´ll often find yourself fighting the tide and swimming hopelessly upstream.
The next day I stopped in for breakfast at the restaurant across the street. Over a ham, egg, and cheese sandwhich and a huge fresh juice blend ($1 for the juice), I met Jesus and David, the owner`s sons. Jesus is 12, very smart, and learning English and Hebrew from the toursists that patronize the restaurant. He grabbed my copy of From Beirut to Jerusalem (not exactly a beginner text), began reading, and wrote down every word he didn´t know in his notebook along with my explanation. After breakfast, the kids led me to the supermarket to shop for my Tayrona excursion. Here are Jesus and David: 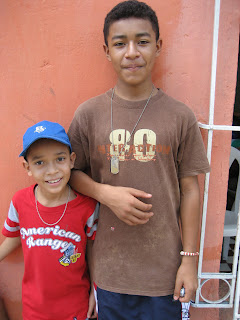 An hour busride later, I was at the entrance to the park: 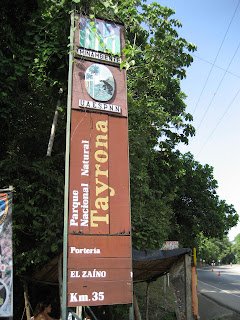 From there, you pay you entrance fee and hitch a $1 ride on a truck up into the park. The truck lets you off at a parking lot and you begin hiking through the jungle. It´s about 45 minutes to the first beach, where you can sleep but not swim because the current is too strong. So, I kept hiking along the beach to the final campground. Here´s a pic during the hike: 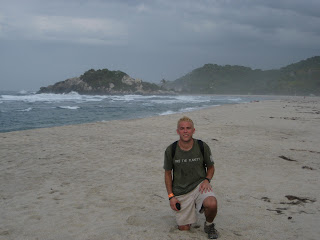 Cabo, where I spent my days and nights, is a small area filled with tents people have brought and hammocks you can rent for $6/night, along with a restaurant and kiosk. I was glad I learned from my Playa Blanca experience and brought food and whisky this time--saved me a lot of cash. 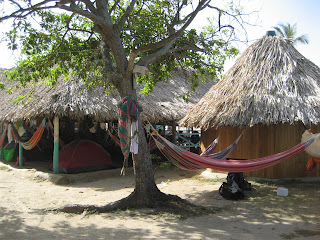 I met a cool group of Colombian students and ended up bunking up with them. The rest of the place was filled with Israelis, who are often cool but tend to stick together. Here´s our hammoc area: 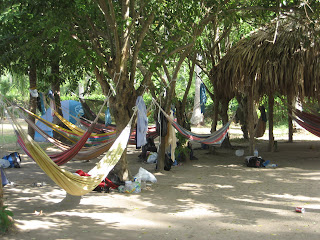 Here´s some of the crew at the hammocks: 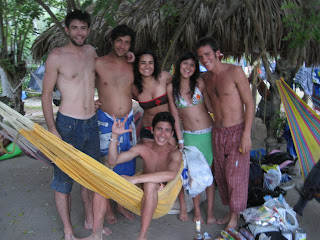 They also had this cool spot up on a hill where you could sleep mosquito free. I didn´t sleep there because I was warned it actually gets cold and windy at night and I hadn´t brought any blankets or warm clothes. Here´s what it looks like: 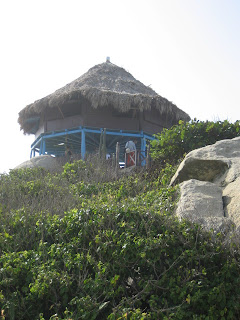 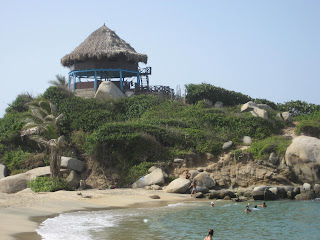 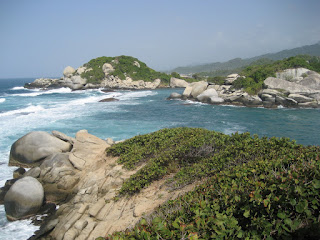 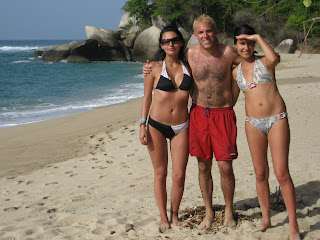 And, finally, the whole crew in a last photo before I left: 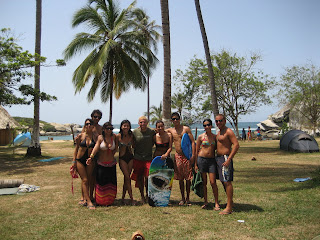 Tayrona was beautiful and a lot of fun. I really appreciated this group of Colombian students from Bogota (plus one guy from the U.S. visiting and one guy from Israel who had stayed on after his friends left) adopting me for the weekend. I got to practice a lot of Spanish (although most of them spoke great English) and have a fun, relaxed time. Entonces, muchas gracias a Samir, Jose, Geronimo, Lina, Laura, Maria, Henry, Gidi, Diana, and Lisa.