Colombian cuisine is perhaps best known for its spectacular variety of fruits--many of which make delicious juices, and some of which can´t be found anywhere else.

Here are two shot I was able to take at the grocery store before I was politely informed that taking pictures of the food is not permitted (didn´t really get an explanation of why, but wasn´t going to push my luck).

In this picture, going clockwise from the top left, we have maracuya (yellow, aka passion fruit), granadilla (orange), something I can´t read from my notes, papyuala, lulo (orange), and higo. 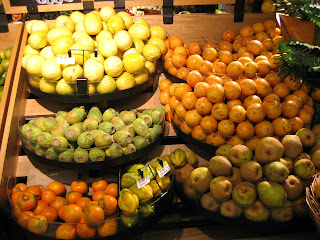 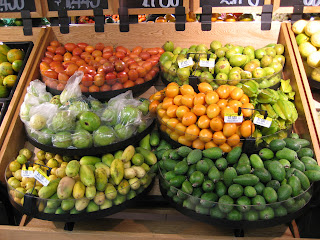 Here is some beautiful papaya: 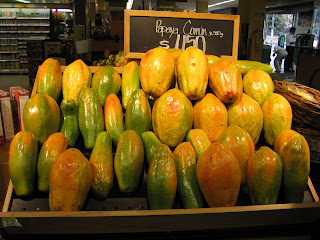 This is juice from lulo, served to me by the Aristizabals. 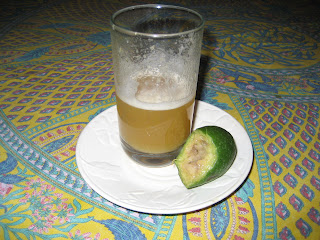 This is the curuba fruit, found only in Colombia. I was using it to make juice at the EcoVillage. 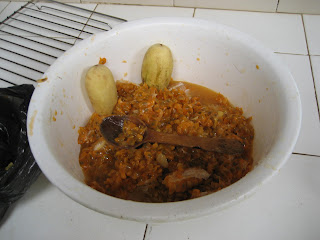 This is ajiaco, the specialty soup of the Bogota region. It is made with chicken, corn, and potatoes and served with capers and cream. The Aristizabal family provided this treat for me, which was absolutely delicious. 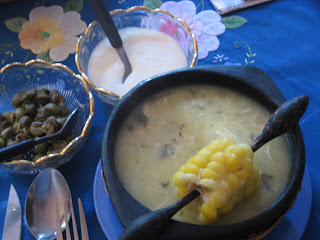 This is bandeja paisa, the typical dish of the Medellin region. It is made with rice, beans, fried pork, a fried egg, and served with fried plantain. I actually didn´t like this too much. 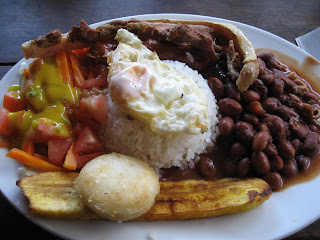 This is a typical breakfast of the Medellin region, called paisa calentado. As you can see, it´s plenty to fill you up ion the morning--eggs, rice, beans, sausage, cheese, and two types of bread. This is called huevos pericos, and it´s a scrambled egg breakfast served by the Aristizabal family. 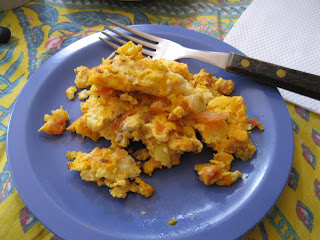 This is a breakfast tamale served to us on the train on the way to the Catedral de Sal. 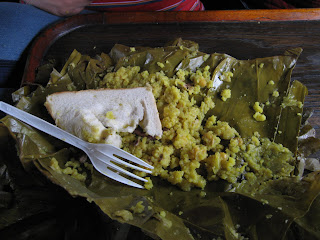 These rolls are called almohabana, and they are extremely buttery and delicious when eaten hot. 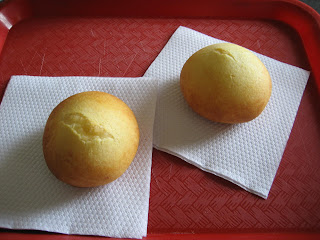 
I was riding on a bus in Bogota when I saw this out of the window. It looked so enticing, I had to backtrack and find the store. 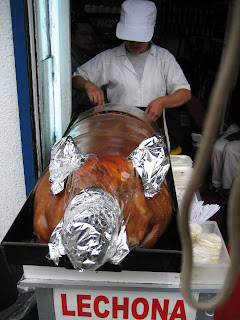 Here´s what the actual food looked like. I was a bit disappointed because there was lots of rice and not as much freshly cut pork as I´d hoped. But, what the hell, it still came from inside a whole pig. 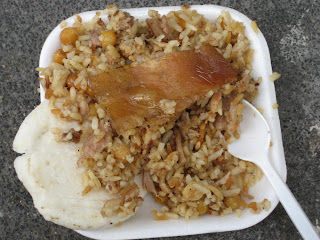 OK, this is probably the most truly ¨typical¨ food around. Throughout most of Latin America, roasted chicken on a spit (what we´d call ¨rotisserie¨) is wildly popular. You can get it almost anywhere. Fried chicken is a close second in popularity. 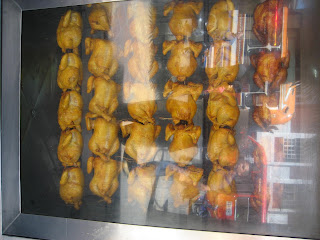 I don´t know how typical these things are, but they were awesome. They´re called torta choclo con queso, or basically a fried corn cake with cheese in the middle. I got one of these for breakfast in Medellin and it was incredibly tasty and filled me up for hours (for something like 50 cents). 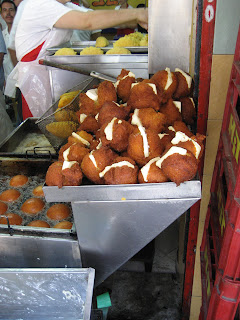 This fish is called sierra and it came as part of a typical lunch, which I enjoyed with Marcela´s parents in the town of Chia outside of Bogota. The lunch started with ajiaco and came, as you can see, with rice and salad on the side. Interestingly, many Colombians do not drink anything with their food. They will eat their entire meal and then sip a drink afterwards. 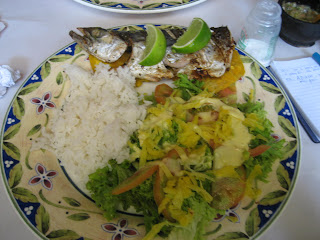 This was one of my favorite meals in Colombia. It is a shrimp ceviche--cooked shrimp mixed with mayonaise, ketchup, onion relish, and served with crackers. This cup cost $3 right outside the walled city in Cartagena, and was enough to fill me up. 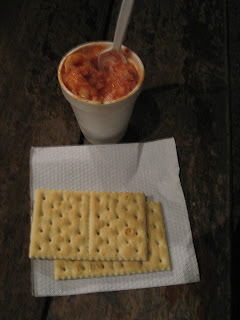 Finally, here´s a shot of a simple fried fish meal that I enjoyed often during my stay. This one was from my adventure with Carlos outside of Medellin, and I´m pretty sure it was talapia. The best fried fish meal I had actually came on Playa Blanca, but I neglected to take a picture of that one. Sorry for letting down my demanding fans. 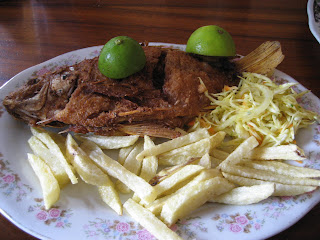 While spending time with my friend at Aldeafeliz, the EcoVillage outide of Bogota, I enjoyed many meals and snacks with the residents.

And, here are a couple of snacks. On top are chicharones, or friend chicken skin. Below is jalea de guayaba con queso (guava jelly with cheese). 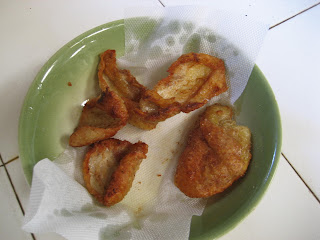 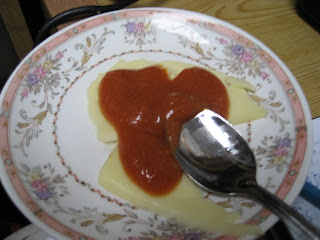 Avid readers will remember the culmination of my last, charmed, day in Bogota at Andres Carne de Res--where a drunk man bought my friend Mafe and I dinner. Well, here´s what we ate.

I had--what else at a place called carne de res--steak. It came undercooked in the midde but on a sizzling pan so I could sear it to my taste (slightly less undercooked). Perfect. 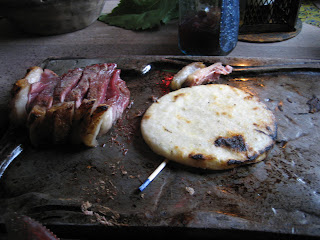 Mafe is a vegetarian, so she this nice italian fried cheese dish. I can´t remember what it´s called, but it was delicous. 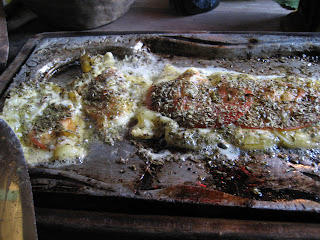 Finally, it´s always important to leave room for dessert. I didn´t do that much searching for typical desserts, but Marcela´s parents introduced me to some when they took me out to lunch. After dining in Chia, we stopped at a dessert place in their hometown of Cota.

Clockwise from the top we have tiramisu de cafe, leche asada, and torta de tres leches (with a dulce de leche-type sauce). My favorite was the leche asada, which basically means grilled milk. 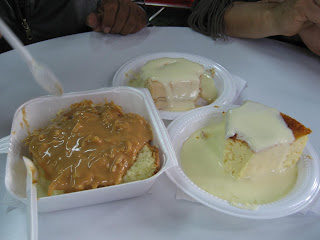 So delicious looking. I fine the bandera too heavy. I've head those bread things and they were AWESOME!

I am very happy you had a good time trying our colombian food. Hopefully the experience was great in everything else, and Thank you much for posting good things about that.

oh! and by the way... I didn't know either that taking pictures of food is not polite.... that is something of the people you were with, not of all colombians... :0)

I am assuming you are a "putero" like most of the white trash that visit my couyntry.

To Anonymous, Why you ask this guy if he is a "putero"? This is not a spanish wordd but perhaps this term is invented by the young generation of colombians. Why the white are calling trash? are you black? so only the black have access to the "pu...s" If a city does not have "P..s" there is no reason for "puteros" to visit it. So they are the "trash", not the visitors.

Loooove colombian food! We have so much variety of delicious fruits, from big or small, sweets or sour, brilliant or opaque, all are wonderful :)

Yummy food! Colombian food has a diverse variety of delicious dishes... I really want to taste them once.

If you are going for most excellent contents like I do, simply pay a visit this web page every day because it presents feature contents,
thanks

Feel free to visit my blog post; diets that work

Hi, I wish for to subscribe for this web site to obtain most up-to-date
updates, therefore where can i do it please help out.


Take a look at my blog :: cellulite treatment reviews