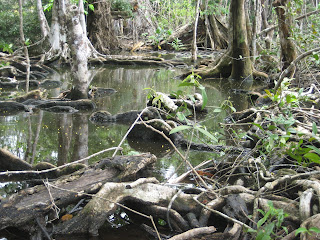 On Sunday morning, after our fun night out dancing Tipico, Leah was exhausted from having traveled for the past 10 days--and the house was about to get crowded because Leah´s host mom Noah´s two daughters, who normally stayed in David during the week, were going to be home since there was no school.

We decided that would be an ideal time for me to see Bocas del Toro and get out of her hair for a few days. I got on the bus and headed through David (surprise, surprise) and up towards Bocas. Knowing I couldn´t make the last ferry onto the islands, Leah arranged for me to stay at Lost and Found Eco-Hostel for the night (see previous post).

The next morning, after sleeping in a bit, taking a hike on the property, and grabbing some lunch I headed up to Bocas. Bocas del Toro is a set of islands off the Caribbean coast of Panama known for beautiful jungle and great surfing. It has become somewhat of a gringo magnet over the past 5-10 years.

Getting to the islands requires taking a bus and then a short water-taxi. Water taxis are a staple in the area, shuttling people from island to island from anywhere from $1-3 depending upon the distance--I ended up quite enamored with them.

I got off the boat on the main island of Colon (also known as Bocas del Toro), wandered into town, and was greeted by a local who had been on my bus the previous day. He led me to the Mondo Taitu hostel, which was also the first listing in Lonely Planet. I had a basic prejudice against the first places listed--mainly because Lonely Planet has created a sort of winner-take-all economy amongst hostels (get listed, have business, don't and struggle--even though what's listed can often be quite random); but I figured it wouldn't kill me this time.

Mondo ended up being the main party hostel, run by a few college buddies from the U.S. It had upsides (a fun happy hour every night right downstairs) and downsides (hard to take early evening naps; the water would often be off for hours--this was a problem throughout the islands, but most large hostels had taken steps to correct it). Here's a shot of the hostel entrance: 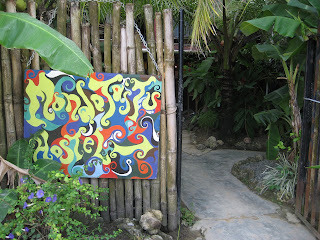 A big upside was my two roommates for most of my time in Bocas were Jenny (left below) and Claudia (center below), two cool German women from Cologne. Here we are enjoying a nice dinner on one of our last nights: 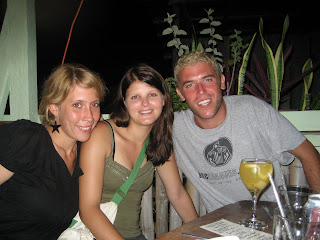 My first night out I met Marlen, who is a waitress at the restaurant/bar across the street from Mondo. She came out to meet us after her shift and from there on became my private tour guide to the islands. 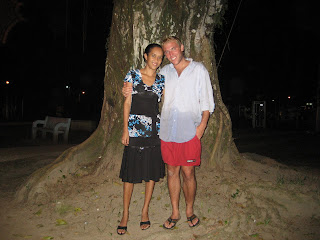 The next day, Marlen took me to the island of Bastimentos. We started this amazing trip on a water taxi, then hiked across the island through jungle before finally emerging on a beautiful secluded white sand beach. 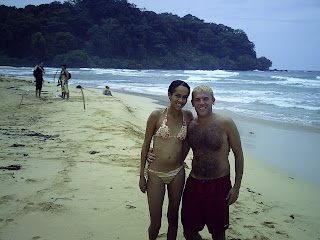 A couple of days later, we went to Playa del Drago, which is on the other side of the main island. Here are some shots from that adventure.

First, the mangroves right up against the beach. I love these--they remind me of the enchanted forest from the Princess Bride (the place with the R.O.U.S.--rodents of unusual size). 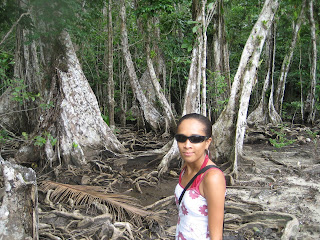 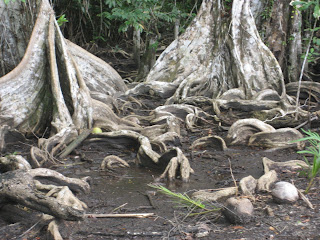 Next, some beach shots: 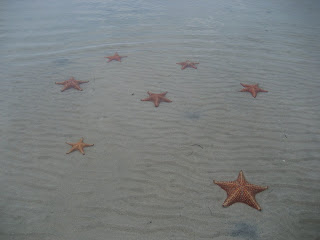 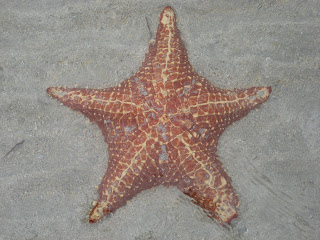 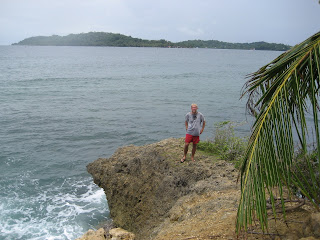 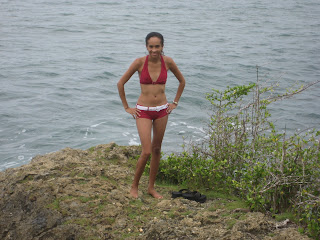 A couple of days later, I hit the famous Red Frog beach on Bastimentos to try surfing. Ivan from the boat from Colombia was also around and, being a great surfer, he gave me some tips. Unfortuantely the conditions were less than ideal, this was only my second time surfing (the first being 10 years ago in Australia), and I generally sucked. Oh, well. 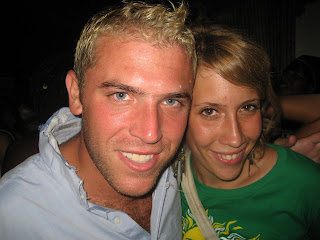 In addition to being famous for surfing and diving, Bocas has a pretty active nightlife. The bars rotate their "ladies nights" on various days of the week, and this is where most gringos head--often after staring out at Mondo hostel for 50 cent beers and $1 international drink specials. These drink specials were quite conducive to drinking games on the patio: 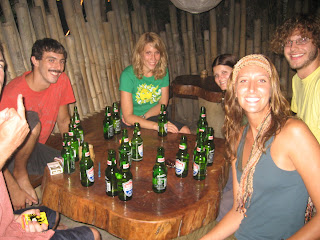 One of the bars had a swimming area with a sunken ship out back. Another had a diving board so folks could get drunk and then dive into the sea. Here are some pics: 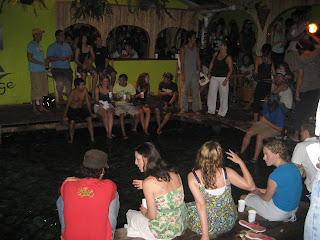 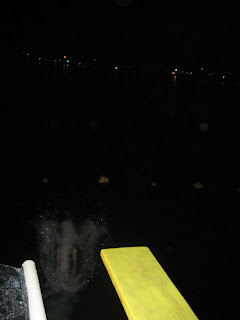