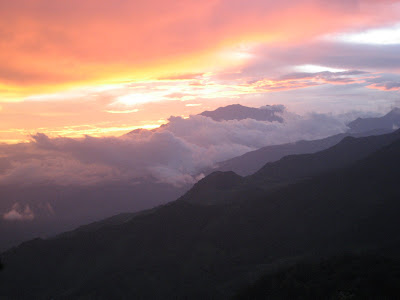 After a 9 hour busride to the border town of Frontera and another 15 minutes on a small bus, we arrived at Leah´s hometown for two years--Progreso.
Here´s a shot of the property. There are a couple of houses on the same property shared by an extended family. 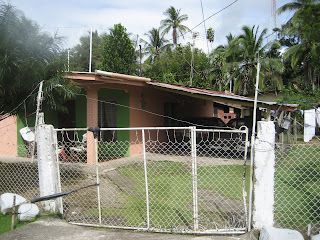 Here's a shot of the main intersection in town. 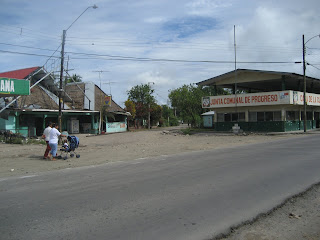 And, here's the grocery. These places are universally known as "Chinos," because they are nearly always owned by Asians--who seem to actually usually be Chinese (although Panamanians don't really make distinctions amongst various far-eastern cultures or ethnicities). 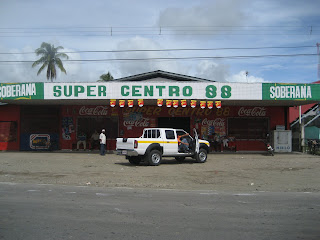 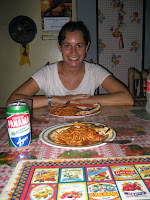 Here we are eating a pasta dinner we threw together our first night.

Saturday morning, Leah took me to meet the folks she works with. Leah is in the Peace Corp's economic development program. She works with a group in the community that grows chile peppers that are eventually used in Tabasco sauce. Her group has been having problems getting paid on time--or sometimes at all--by the subcontractor that they work for directly.

Leah is working to get them a fair shake with the big growing companies. But, in order to ensure a steady income stream she's also helping them start a business growing chickens. The morning I visited, the group was dismantling a chicken coop and moving it about 30 meters.

The story goes that the coop was currently on the property of one of two brothers who were involved in the collective. Well, there was a falling out between the brothers and one of them (the one hosting the coop) left the cooperative. Because he was no longer invested in the cooperative he failed to adequately protect the chickens--and they were all stolen by the "maleantes," or bad people. So, now the group was moving the coop to the other brother's property (who, of course, lives next door).

Sorry I don't have any pictures of this, but I didn't think it would be too cool to take pictures of these folks that Leah's working with.


A Night on the Town

The next night, we decided to head out. This was a special occasion for Leah, who doesn't get to go out near her hometown much. First, she lives and works with evangelical Christians who don't take too kindly to drinking. Second, it is not considered respectable for women to go to bars--especially without a male escort.

So, my being in town allowed Leah to head out--in Frontera, the larger town next door (she would still never go to a bar in Progreso where she would be recognized and her work potentially compromised).

Around 8pm we headed to Frontera. It was a bit too early to start dancing, and we passed a pool hall so we decided to head in. Well, as we walked in it kind of felt like the music came to a screeching halt. We were certainly the only gringos and Leah was one of only two women in the joint. Plus, as we got about halfway in, we noticed that there were no open tables.

We were about to turn around and head out, when a young Panamanian guy approached us and welcomed us in. I asked if he worked there and he said it was his friend's place. In a confusing exchange he ushered us to a table which had mysteriously cleared (in retrospect it appeared he had paid the folks at the table to quit).

As soon as we started playing, he brought over beers for Leah and me. At this point, we were completely confused and trying to figure out this guy's angle. Before we got halfway through our beers, he was back with two more, making small talk. After the third round, I finally asked him to stop bringing beers. Leah didn't want to drink very much, so I was "stuck" drinking about four of the six beers.

We weren't sure what this guy was up to. I figured he was trying to interpose himself between us and the bar, and tack on an extra quarter per beer. But, beers were only 50 cents, so no matter what he was up to there wasn't a lot of money at stake. So, Leah and I relaxed, played pool, and had a good time. We found it pretty funny that you could pretty much feel the eyes on Leah's butt as she leaned over to take a shot.

When we were done, I headed straight to the bar, wanting to pay directly, not through our new friend. When I got there, though, the bartender told me everything was taken care of. This guy had paid for all of our drinks and our pool (he was actually $1 short which I gladly threw in).

This incident was both heartening and sad. Obviously, it was cool that this guy welcomed some unfamiliar faces. On the other hand, we treated him with such guarded suspicion when in the end all he wanted to do was show a couple of gringos a good time in his town.

The reality, though, is that I don't think we were wrong to be suspicious. All too often, as gringos people (correctly) assume we have money and we wear a target on our wallets. It's just a shame that our appropriate caution prevented us from opening up to this guy until it was too late.

After our pleasantly surprising time at the pool hall, we headed a few doors down to go dancing. This was the true purpose of our venture--to dance "tipico," the typical Panamanian dance involving (as all Panamanian music seems to) plenty of accordian.

We entered a cavernous dance hall featuring a large dance floor surrounded by plastic deck chairs. The music alternated between "tipico" and reggeton. We were again the only gringos in the place, which made it extra fun. The bizarre thing, though, was that every minute or two, the DJ would interrupt the music and talk for 3-4 seconds--just enough time to throw you off your rhythm.

He was speaking way too fast for even Leah to understand, but I kept hearing "punto com," or dot com. We later learned that he was doing two things: a) saying general stuff like "everybody get up and dance;" and b) advertising for websites that feature pictures from the party (which is apparently quite popular in Europe as well). I did notice people taking pictures, but I assumed they were trying to sell the pictures on the spot.

In the end, this was one of my most genuine local experiences, and a truly fun night as well. 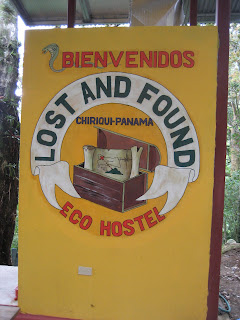 On the way from Progreso to Bocas del Toro, a set of islands off the northern coast, I stopped for a night at the Lost and Found Eco Hostel, nestled in a national reserve forest. It is owned by Andrew, a 31 year old Canadian, and his Panamanian wife Stephanie.


Lost and Found is a cool place, as you can see from the photos. They´ve set everything up in an eco-friendly way, there´s a nice place to chill out and watch the sunset, and they have some great trails on the property. 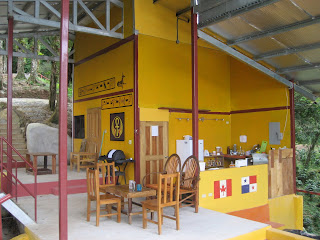 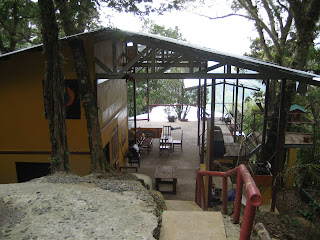 Here's the view from the spot pictured above: 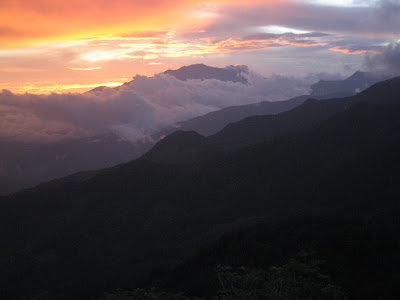 But, they can´t advertise the place widely. The problem is that a hydro-electric company that owns much of the surrounding land wants to build their own eco-resort. They got to the relevant government officials before Andrew did--and likely with more money than Andrew could--and now the Panamanian government is making his life hell trying to force him out. So, Andrew and Stephanie are trying to run the place on word of mouth for now.


The next day, I headed to Bocas del Toro, but that gets its own post. So, for now I´ll skip ahead.

When I returned from Bocas, Leah met me in David and we headed up to the mountains, where the climate is more moderate. Becca, another Peace Corps volunteer, is based in the small town of Las Nubes, which is at the base of an international park (because some of it is in Costa Rica). She was away and let us use her charming casita (small house). Here are some photos of the house and surrounding area: 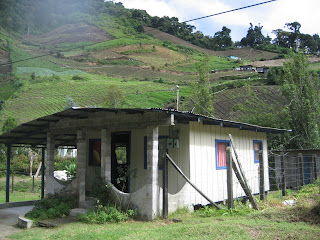 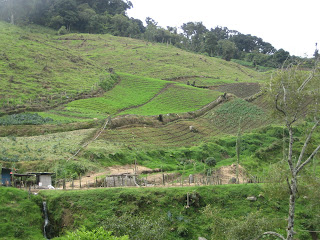 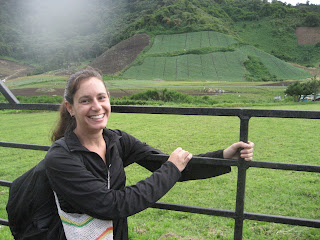 After settling in for some blissfully cold sleeping, we got up the next day to hike into the park to a waterfall. Here are some photos: 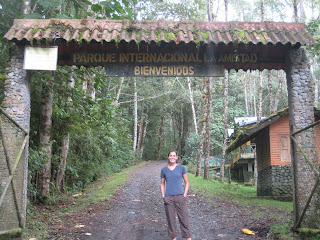 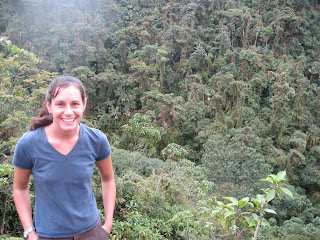 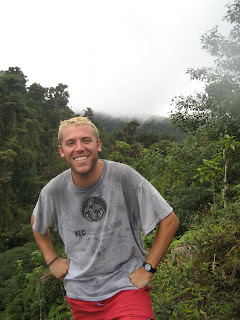 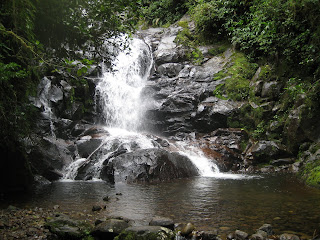 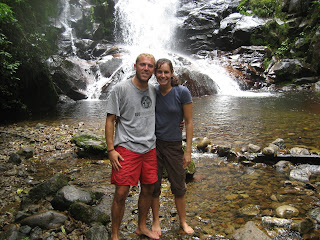 On the way back from our hike, we stopped at the local tiendita (small store) to pick up some provisions to cook dinner that night. We got two chicken breasts, some pasta, a huge head of broccoli, and some garlic to make a pasta-based stir fry. Leah asked me to guess the price of it all before they rang it up. Knowing it would be cheap, I guessed $4 total. It was less than $2. Amazing--we ate a great dinner (see picture) for a dollar each. 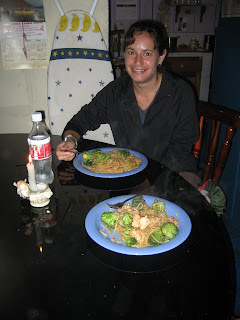