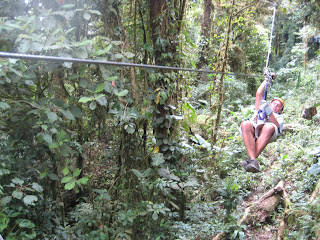 On Thursday morning, August 9, I walked across the Panama/Costa Rica border and hopped on a bus to San Jose. On this busride it really hit me that I had to throw my trip into high gear. I had 18 days to get through Costa Rica, Nicaragua and Honduras and get back to Guatemala City for my August 28 flight home. I also had delusions of spending some more time in Guatemala since there was so much there I didn´t see the first time around. After six months of being ¨muy tranquilo¨I was now in a serious rush.
I passed an uneventful night in San Jose and got on a 6:30am bus out the next morning to Monteverde a small town that´s become a tourist destination due to jungle-related activities. I arrived at 11:30, checked into a hostel, and signed up for a 12:30 canopy zip-line tour.


Flying (Through the Jungle)

It was pretty sweet flying through the top of the jungle. One of the lines was about 500 meters long. Here are some cool shots of the closest I´m ever likely to get to flying (until I finally try sky diving). 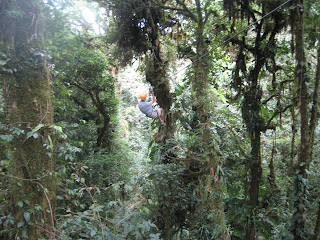 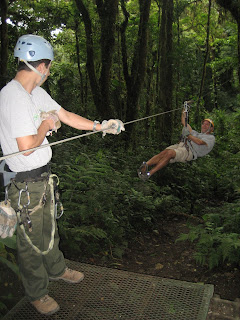 And, towards the end they had a free-fall, tarzan-style jump. Here´s me swingin´from my artificial vine: 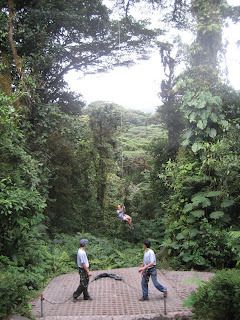 Nightwalk (Through the Jungle)
After flying through the jungle by day, I decided to see it at night. Several companies in Monteverde offer guided nightwalks. I was a bit skeptical at the $12 price for a two hour walk; but it was well worth it. Our guide was excellent and I saw more cool animals on this trip than on most of my other vacation combined.

At the beginning of our walk very high in a balsa-like tree we saw what our guide said was a two-toed sloth. We had to take his word, because it just looked like a dark blob way up there (not even worth posting a picture).

Sloths are fascinating animals. They live for 20-25 years, mostly alone. They used to live on the ground, but they now spend 95% of their time up in the trees to avoid predators (wildcats and eagles), mostly upside down. They come down only to defecate, which they do ONLY ONCE PER WEEK. They will actually bury their shit in the ground so that the smell doesn't attract predators. The reason they seem so "lazy" is that they eat very rough leaves and their digestive system has to work very hard to consume them.

Next, let's talk spiders. I hate spiders--especially hairy ones. But, I have a morbid fascination with them as well. Plus, I always thought that tarantulas were deadly poisonous, but it turns out most of them can't really hurt you that bad.

This is a female, orange-kneed tarantula, which lives 18-20 years: 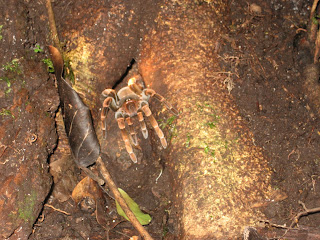 And, here's an albino tarantula: 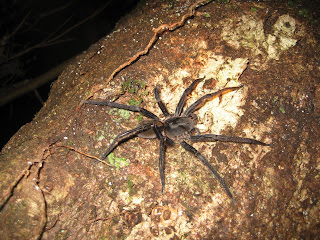 And this little guy is a relative of the wolf spider: 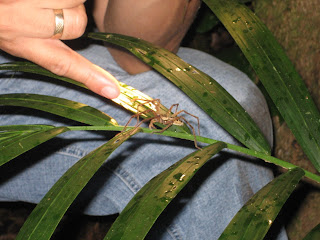 Our guide said this was the find of the night, a very poisonous side striped palm pit viper: 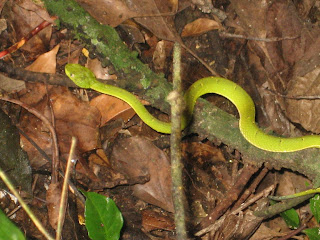 This cool bug looks exactly like a leaf and is called the "leaf mimic katydid." 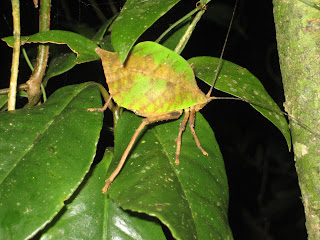 This is a giant ant hill which houses a colony of at least 3 million ants--all with only one queen. 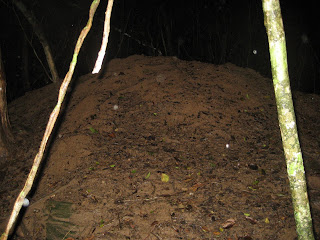 Here's a nice shot of a cricket: 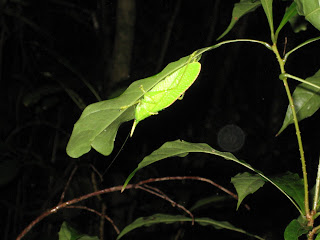 It was a very full day--the kickoff of my new (rushed) life as a traveler with severely limited time. But, it was quite fun.
Posted by arl at 10:02 PM

I like this blog is fantastic, is really good written. Congratulation. Do you want to see something more? Read it...:Great investment opportunity in Costa Rica: beach real estate, condo, condos for sale. Visit us for more info at: http://www.costa-ricarealestate.com

Feel free to surf to my web-site; Louis Vuitton Handbags