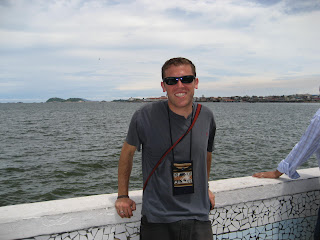 I went to Panama City twice on this trip. The first time was on a full day layover when I flew home in the middle of my trip. I left from Lima and stopped over in Panama City on my way to Miami and then New York. Apparently full day layovers are common there because there was a tour conveniently designed to show you the canal and other spots and return you to the airport in time for an afternoon flight.
The second time was when I headed there after my boat trip from Colombia to the San Blas Islands.

Panama City I
The biggest attraction for a one day visit is obviously the canal. I didn't realize what an incredible feat of engineering the canal was at the time, and how many people died during its destruction. Sometimes I think that due to our incredible world-altering achievements as a species (both good and bad) I get lulled into thinking we can do anything and sort of unwittingly discount the difficulty of certain projects.

The French tried to build the canal starting in 1880, but after 22,000 of their workers died, they gave up. The U.S. took over and eventually completed the task--but not before a total of nearly 28,000 people had died--largely from landslides and diseases such as malaria and yellow fever.

Plans are now afoot to build an even wider canal, as modern ships are starting to exceed its capacity.

Here is a monument to the canal's principal engineer: 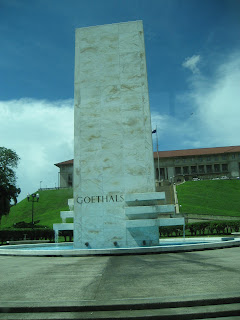 The key to the canal is an elaborate system of "locks" that moves millions of gallons of water to allow ships to pass through. 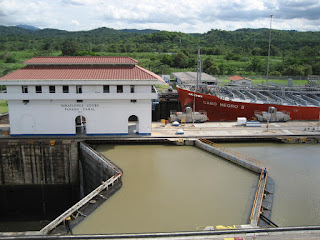 Tolls on the canal are based upon weight. This ship paid more than $200,000 to pass through. The smallest charge ever recorded was less than 40 cents paid by a guy who swam through. 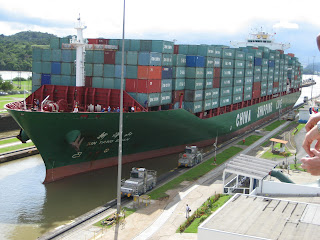 Here are some shots from the historic portion of Panama City: 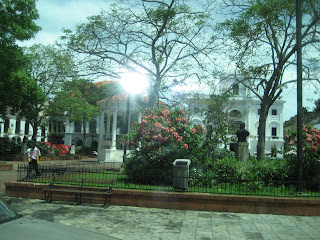 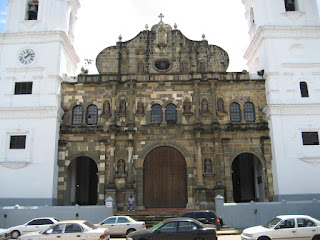 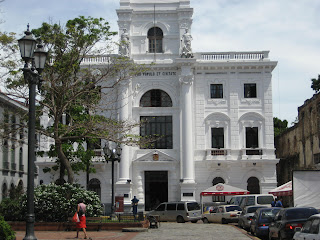 Our crew from Captain Hernando's boat shared transport from San Blas to Panama City, arriving on Wednesday afternoon. Here, I had plans to meet up with Leah Donohue, a law school friend currently serving in the Peace Corps on the Panama/Costa Rica border. My timing was fortunate because she was in Panama City that week to attend the swearing in of the new Peace Corps class the next day. 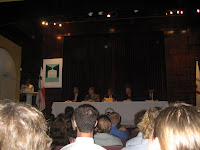 Here´s a shot of the swearing-in ceremony at the Canal Museaum in the old city (featuring the U.S. ambassador amongst others). More than 30 new volunteers were sworn in after having undergone 10 weeks of intensive training. After a night of drinking in Panama City, these new folks were ready to head out to their sites all over the country. Some will be building latrines in indiginous villages and others will be helping start business cooperatives in small towns.

We partied with the new folks on Thursday night and then headed to Leah´s site on Friday, which took about 9 hours on the bus.
Posted by arl at 2:46 PM