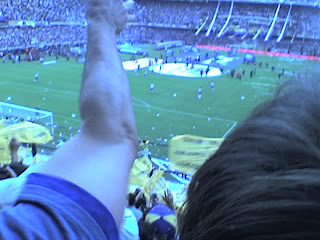 On my last full day in Buenos Aires, I was able to go to the Argentine version of Duke v. UNC, Michigan v. Ohio State, and the Red Sox v. the Yankees all rolled up into one. Boca Juniors and River Plate are the two most popular futbol teams in Buenos Aires (and probably the country). Diego Maradona (who in spite of endless drug problems and irresponsible behavior is still a god here) played for Boca for many years and has a private box in the stadium.

As I was recently told, the three things you don´t talk about in polite conversation in Argentina are politics, religion, and futbol. The only games that incite more passion than this one are national World Cup games (and possibly America´s Cup, which is the Latin American championship).

We were picked up at a hostel and loaded onto a bus which then went and picked up several other groups (including some who got on and then off again--typical Argentine chaos). On the bus we were given our tickets and told to stick close to the group (of about 40). Before the game, we had all been regaled with tales about how dangerous the game and the Boca neighborhood can be. ¨Don´t take anything with you.¨ ¨Don´t lose the group.¨ ¨There will be fights, stabbings, witches, etc...¨

We got into the stadium without incident (not insignificant given that another group from my hostel never got in--it seems their ¨tickets¨didn´t exist) a little after 1pm. The game started at 4:30. We had more than three hours to sit in cramped quarters and defend our seats (well, there aren´t any seats in the popular section, it´s just a place to stand) as the stadium filled up.

There was no drinking allowed, which was surely a smart policy but made for a boring wait. There was, however, plenty of singing during the hours-long build up.

Then, the teams were introduced...and this was the best part. When River came out, you can´t imagine the depth of invective hurled at the players. Every Argentine curse word was brought out in a barrage of pure hatred.

When Boca came out, the stadium was transformed. Blue and yellow smoke went off in the stands and everyone in the stadium hurled paper and toilet paper at the field creating an amazing spectacle of graffiti. Interestingly, they never bothered to clean much of the graffiti off the field, even at halftime. The entire game was played with white paper covering the corners of the field.

The River fans were separated into a small section at the top of the stadium. Throughout the game, streams of clear liquid would pour down from this section down onto the Boca fans below. I was confused. Were people actually buying bottles of water and throwing them down, or making return trips to the bathroom? Actually, I later found out, that clear liquid was piss.

The River fans weren´t just pissing off the side. In a manner that seems somehow worse because premeditated, they were filling up water bottles with piss and dumping them off the side. Apparently this is expected and the same thing happens to River fans at their stadium. We´re not in Kansas anymore...

The game was a 1-1 tie. Boca scored within 30 seconds and clearly outplayed River in the first half. River´s goalie made several spectacular saves to keep the score at 1. But River came on strong in the second half and evened it up.
The result was a big disappointment for the home crowd because Boca was much higher in the standings and heavily favored on their home turf. But, despite the result and the intensity of invective at the beginning, at the end of the match the crowd applauded in a gesture that I interpreted as being intended for both teams.

The other interesting part of the game was the end. After the final whistle blew no one moved. I was confused. I was pretty sure there was no overtime, and there definitely wasn´t another game. So, why wasn´t everyone heading for the door? In the U.S. there would be a mad stampede. I turned to the Argentine father and son I´d been talking to and asked ¨Porque nadie salen?¨

They explained that the police block the exits while the River fans leave first so there are no fights. After all the River fans are gone, the rest of the stadium can leave. I´ve heard that some opposition fans are known to lock themselves to the seats so that all of the home fans have to wait while they´re extricated.

The fascinating part was that, even after a disappointing loss, everyone just sat there perfectly patiently and waited--for about half an hour. I can´t imagine this happening at home. It was a telling example of the patience of the Argentine people. Nothing happens quickly here, so no one expects it to.

By the way, the game/atmosphere never felt dangerous for one second. Because of the no alcohol rule, even if people where shitcanned when they showed up at 1pm to claim their seats, no one could possibly have been very drunk by 7pm when the game ended. So, the scene outside the stadium wasn´t rowdy at all. But, since I listed to the warnings, and didn´t bring my camera, these are the only pics I have--taken with a friend´s cell phone. 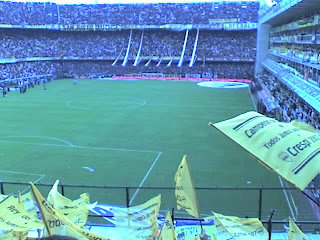