Welcome to the long-awaited second installment of ¨la comida tipica.¨ As faithful readers will recall, I plan to do a section on the typical cuizine of each country I visit. Hence, I´ve been dutifully photographing many of my meals--making me appear extremely bizarre to locals and tourists alike. Anything for free press...

La Carne
Anything written about typical Argentinian food should start--and some would say end--with steak. Beef is extremely cheap and high quality here. I´ve eaten several fantastic steak dinners that have cost about 1/3-1/4 what they would in a nice restaurant in the U.S. Parillas (pronounced with the unique Argentinian accent as PAR-EEJ-AS), steakhouses, are ubiquitous and usually of decent quality.

My favorite parilla is La Cabrera (Cabrera and Thames in the Palermo neighborhood for those thinking about making the trek). Several folks recommended it and it did not disappoint. Here´s the outside of the restaurant: 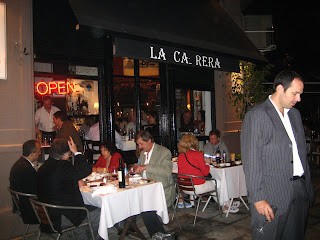 At La Cabrera, I indulged (twice) in bife de chorizo, which is basically a New York Strip (my favorite cut). It was huge and came with lots of yummy sides: 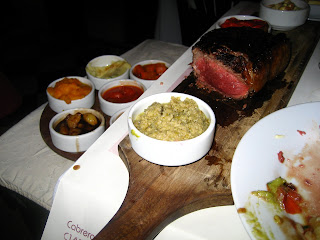 The other top quality cut is called lomo, and it´s basically a filet mignon. This lomo is from a great restaurant in Bariloche called El Boliche de Alberto. 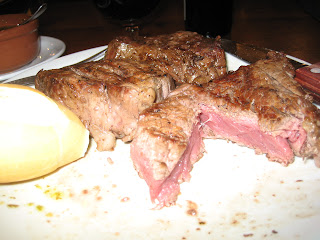 El Vino
Argentina is also famous for its high quality (and incredibly cheap) wines. You can get a nice bottle of wine here for $4 and one that won´t make you wince for $1. Here is a picture from a vineyard in Mendoza where I enjoyed a local wine with the French proprietor and three French guys I met at my hostel. 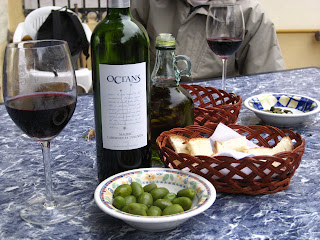 Lunch
Another typical feature is the nice sit-down lunch. This meal starts late (2pm or beyond--when you eat dinner at 11pm as is typical here, it helps to have a late lunch) and often features an ¨executive menu¨with three courses for a very reasonable price. Here are some pics of my lunch with Ines, a local reporter who later took me out with her cool friends. 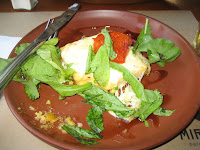 These were our appetizers. First is polento and below is mozzerela al horno. 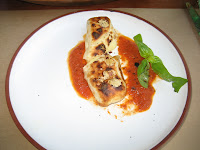 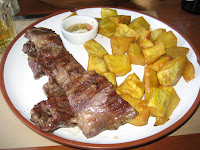 Main courses were entrana (a cut of steak) with batatas fritas (fried sweet potatos) for me and pollo (chicken) with papas fritas (french fries) for Ines. 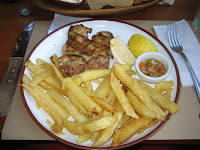 Breakfast
The universal breakfast food around here is medialunas (means half-moons), or croissants to the francophiles of the world (and even us in the U.S.). You often get 2-3 of these each morning included in your hostel stay. The quality ranges from sticky-warm-tasty-delicious to stale-cardboard-why bother. 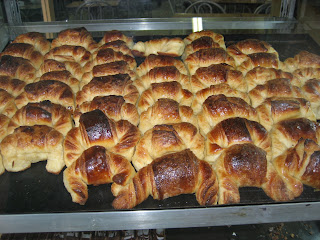 Fast Food
Argentinians appear to eat plenty of unhealthy food on the run. Interestingly enough, McDonalds will cost you almost as much as a cheap steak here. But, hamburguesas, pizza, empenadas, and panchos (hot dogs) from local shops are ubiquitous and cheap. Here are some fairly typical fast food signs (notice the prices on the right and divide by 3 for US dollars): 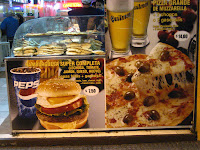 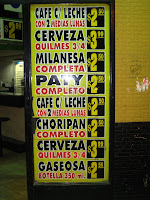 Here are some close-ups of empanads. The bitten one is pollo (chicken, pronouced po-jo here in Argenina and po-yo everywhere else). 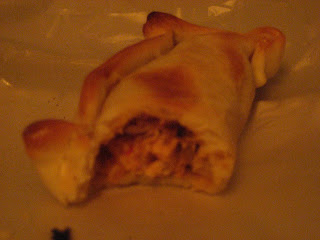 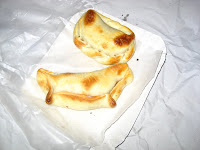 Here are the panchos (hotdogs) and ¨superpanchos¨(bigger hot dogs). These are everwhere and dirt cheap (usually about 1.50p (or 50 cents) for one fully loaded. The underlying hotdog is not very good--dropped into some hot water for a bit, so soft and a bit slimy; but the toppings can be great. I can´t help thinking that throwing these dogs on the grill for a few minutes to finish them off would improve the whole experience tenfold--perhaps a business idea for someone wanting to live in Argentina. 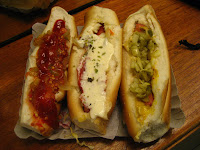 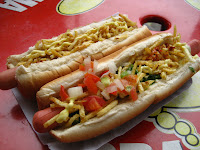 This is milanesa--basically fried beef. It´s all over the place and I thought it would be disgusting. But, as I was at the bus station heading out of Buenos Aires I figured I´d give it a try. It was surprisingly tasty--although the idea of fried beef is a bit much (like chicken fried steak from the American South). 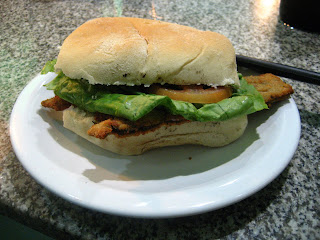 Curiously for a place that specializes in beef, the hamburgers are usually terrible. I finally figured out that they remind me of middle-school lunch burgers--which probably tasted a lot better to the 11 year old palate than they do now. Similarly, for a place with such heavily Italian influence and so many pizza places, I found the pizza to be horrible in most cases (I did have a delicious pie with jamon crudo and eggplant at a nicer sit-down place; but they certainly don´t have NY slices).

All this raises an interesting question: How can Argentinians, and especially portenos (as residents of Buenos Aires are known) be so fit and beautiful if they eat so much steak and fast food? Personally, I´ve been running about 2 out of 3 days and still feel like my time in BA has taken a toll.

I can certainly vouch for the fact that the women here are gorgeous. Unfortunately, when I´ve asked locals about this, I´ve heard the words ¨bulimia¨and ¨plastic surgery¨a lot. BA is known as a very image-conscious place, and it appears the woman here are under a tremendous amount of pressure to live up to the porteno ideal. It´s possible that from this standpoint things are worse here than in the U.S.

OK, so that´s the end of our tour of Argentine food. Stay tuned for the next exciting episode of La Comida Tipica, coming to you live from Chile...
Posted by arl at 6:29 PM