Mendoza is a nice small city about twelve hours nearly due west of Buenos Aires. Mendoza is famous for wine--most Argentinian wines come from the region, but the Malbecs are particularly well-regarded.

Obviously, I tasted some wine. A bit of personal history: when I was in college I took a wine-tasting course at a local restaurant (Parizade´s for those with Duke/Durham knowledge). With one instructor and 60 of my nearest and dearest friends, it was basically an excuse for getting trashed on Tuesday night--I assure you there wasn´t much wine spit out at this affair. But, I did learn two things: a) a nice red wine should have strong ¨legs¨that should linger on the glass when swirled; and b) I didn´t really like wine.

So for about eight years after that I rarely drank wine, only when nothing else was available that would do the trick. Then, about two years ago, I gave wine another shot and discovered that at the right time, in the right mood, it could be quite pleasant. So, nearly 30, I ¨rediscovered¨wine. I still know next to nothing about it, but now enjoy mostly reds (and, of course, sangria, but that doesn´t count).

It´s in this context that I headed out to the ¨bodegas¨in Mendoza. And, no, those aren´t corner stores where they sell 40s in paper bags; it´s what they call vineyards here. Three great French guys from my hostel and I rented bicycles and headed out on the vineyard tour. We rode 35 minutes all the way to the last vineyard, arriving only about two hours before we had to return out bikes. As luck would have it, the couple who run this vineyard, Brigitte and Phillip, are French.

This was both good and bad. It was good because she was an enthusiastic guide and we ended up being able to leave our bikes with her and relax with a bottle of wine outside (see picture below), alongside some great bread and olive oil. It was bad because most of the conversation was in French (she did explain everything in Spanish on the tour, but I understood about 65%).

So, we only made it to one vineyard, but it seemed like a good one and we had a pleasant day. 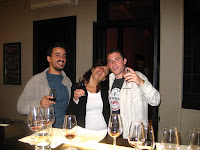 The next day I met Pablo, an architect and friend of a friend, and his ¨novia¨at Vines of Mendoza for a wine tasting. We sampled the famous Malbecs of Mendoza and I was essentially unable to tell one from the other. Oh, well...

That night, Pablo introduced me to his friends and we went to a few bars. They were great and it was a shame that I had a bus ticket to leave the next day because the next night they were having a birthday party for a woman there (she is a chef and was going to cook for everyone).


Communication Breakdown
Which reminds me of a funny story. I was supposed to have dinner with Pablo the night before. As I mentioned, he´s a architect and he told me to meet him at his studio between 9 and 9:30. I showed up at 9:30 and I could see him through the window working on his computer, facing away from me and wearing headphones. There was a locked gate about 10 feet in front of the building, so I couldn´t knock directly. I buzzed and buzzed at the gate for about 10 minutes--but he couldn´t hear me...I even saw him rocking out to a drum solo.

There was a woman waiting on the corner for a bus and I asked her if she had a cell phone. At first she said no, but when she realized my predicament, she called him--but he didn´t pick up. After another few minutes of buzzing I figured this could go on indefinitely so I went around the corner to call him from a pay phone. He didn´t answer, and, of course, when I returned he was gone.

I then went to an internet cafe to get his cell phone number. But, when I tried to call him from a pay phone, it said the number was incorrect. Finally I got some random local guy to call on his cell phone and it worked fine--for some reason I wasn´t able to call cell phones with my calling card. By the time I got in touch with him, he was already home and tired after a long day.

I tell this story because it´s actually emblematic of the biggest problem (thankfully) I´ve been having during my travels--communication (and not because of Spanish). People here tend to make plans at the last minute and work by cell phone rather than email (as I suppose we also do at home with our friends). So, it´s hard to nail down plans days in advance over email, which is my primary form of communication (party b/c Spanish is very hard for me over the phone). And, I´ve had several instances of missing people, waiting at the wrong bar, etc. because I don´t have a local cell phone SIM card. Each country has a different network and requires a different SIM card, so it didn´t seem worth it to buy a new card for each country. And, the minutes are quite expensive.

It just so happened that my second night in Mendoza, the Argentine and Chilean national teams were playing a ¨friendly¨match to warm up for the America´s Cup in town. A group from our hostel painted our faces and headed down for the match. 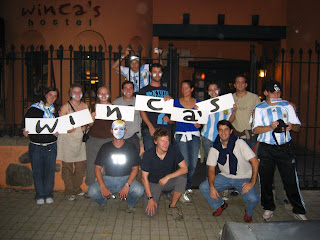 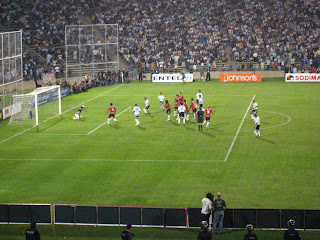 I must admit I was a bit disappointed. First, it was a 0-0 tie. But, more important, I thought because of the rivalry between the two countries the scene would be quite passionate and rowdy. In fact, the whole thing was pretty tame--nothing like the River/Boca game in Buenos Aires the week before. The consensus was that this was because the match wasn´t important and most of Argentina´s top stars play in Europe and were not called back for the game.
Posted by arl at 2:16 PM

Interestingly enough, I've gone wine tasting both times I was in California recently. I'll admit, I'm not much of a wine drinker myself, but for me, that was less the point of the tastings than the experience itself. And not just the experience of tasting the wine, but also of meeting the people who've created it. Each one has an interesting story about how they came to run a vineyard and/or winery, and it's easy to connect to these people through their passion. They're a wonderful set of people, and they're all eager to help you find a wine that suits your personality.