Day 7: A Full Day in Denver

Out on the Boat

We woke up Thursday morning and headed to Cherry Creek to go out on the water with my old friend Rex and his friend and business partner Stevie.  They bought a small boat together and invited us out to waterski.  As it turned out, it was a perfect morning, and this was a real highlight of the trip. 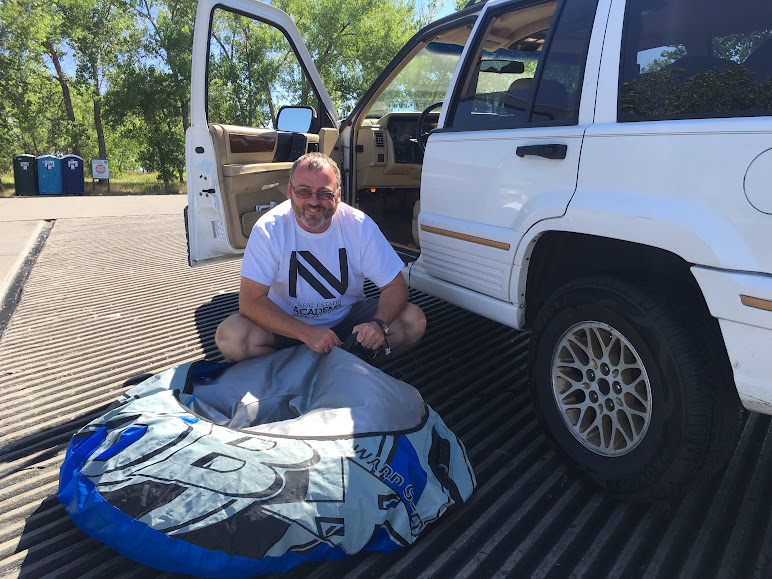 It was great catching up with Rex, and Stevie couldn't have been nicer or more welcoming to us both.  And, I haven't been water skiing since I was nine or ten years old in camp.  Let me tell you, it's a LOT harder at 39--every single muscle in my body was sore for 2-3 days after.

Missy went first, and she was a natural.  She got up on the second or third try and stayed up seemingly forever. 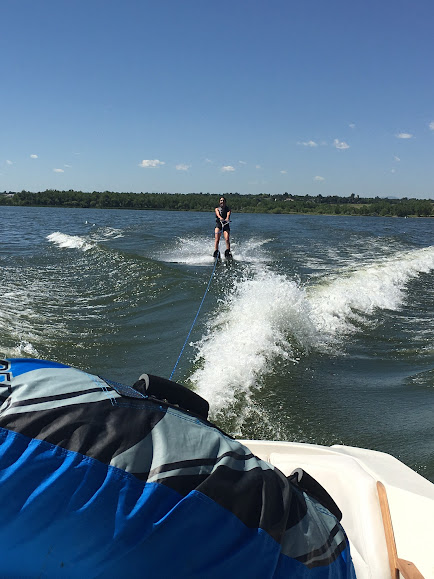 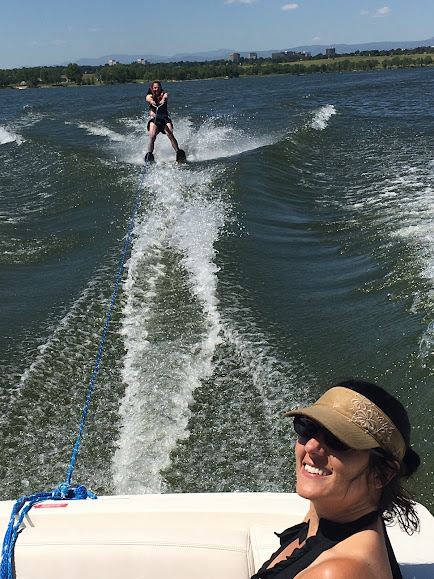 Here's some video of Missy.

Rex and Stevie were real pros, doing tricks and going in and out of the wake (whereas I was just trying to stay up and alive). 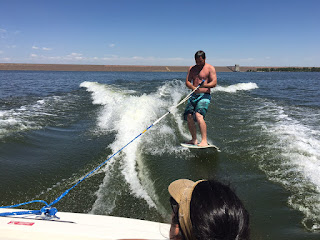 After a really great morning out on the water, I headed back to the PIRG office to work on my brief and Missy treated herself to a massage (oh, that's why she was less sore than me the next day...I thought it was because she is in better shape...oh, yeah, that too...).

I lived in Denver from August 2007 through March 2010, first in a couple of rentals and then in my own place on Knox Court.  I still own the three-unit building on Knox, so after working for a few hours we headed to my old neighborhood to show Missy my place and take in some of the changes.

First, a random shot from downtown Denver.  I became convinced that maroon (like my Subaru Forester) was the most popular color for SUVs, and took this pic in our Denver parking lot to prove my point.  [Missy thinks I'm crazy.] 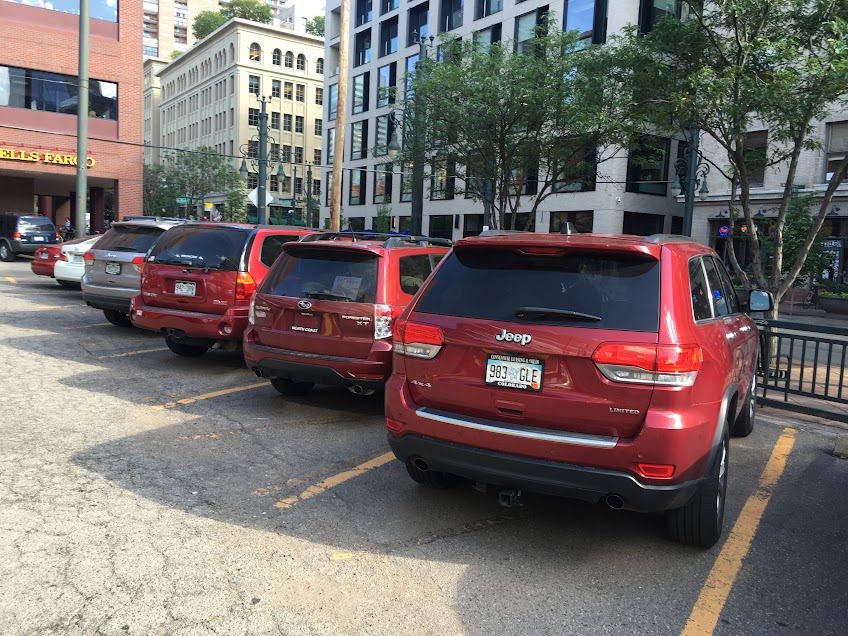 For some reason, I didn't take any pictures of my Knox Court place; but here's an old photo I found.  My trusty property manager Jeff keeps it in top shape. 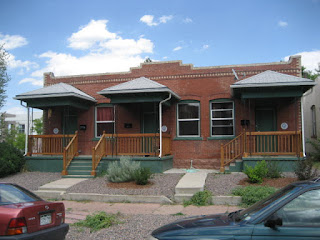 There have been a lot of changes to my neighborhood since I bought in 2008.  My place is right off of West Colfax, just past Mile High Stadium on the way out to Lakewood and the mountains.  Colfax is supposedly the longest commercial street in the U.S.  The east side goes through Capitol Hill, and has long been a hipster spot.  The west side has long been dominated by seedy motels and used car lots.  I bought my place in part because there were plans to spruce up the area, starting with a light rail stop going in a couple of blocks south of my property.

Well, that development is finally happening.  The light rail line went in, and an old abandoned hospital is finally being redeveloped.  There's even a Starbucks on W. Colfax a few blocks down from me--a once unthinkable sign of...well, gentrification I guess.  Denver is booming with thousands of people moving in each month, so property values are rising across the city.  As we all know this is a complex issue and no doubt many folks will be pushed out of the neighborhood as rents rise.

I am definitely excited about the new microbrewery that moved in just a block west on Colfax, though...and Missy and I met Yana (who also owns a house in the neighborhood) there to check it out. 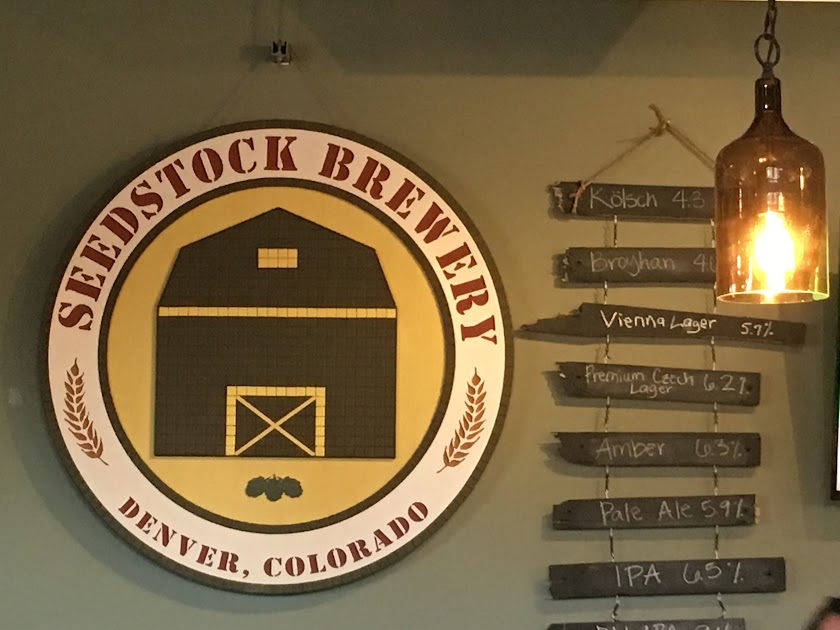 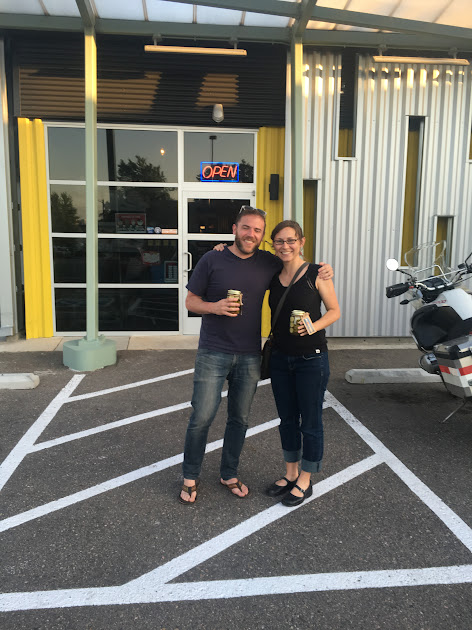 They had a BBQ truck in the parking lot, so we enjoyed a feast with our beer. 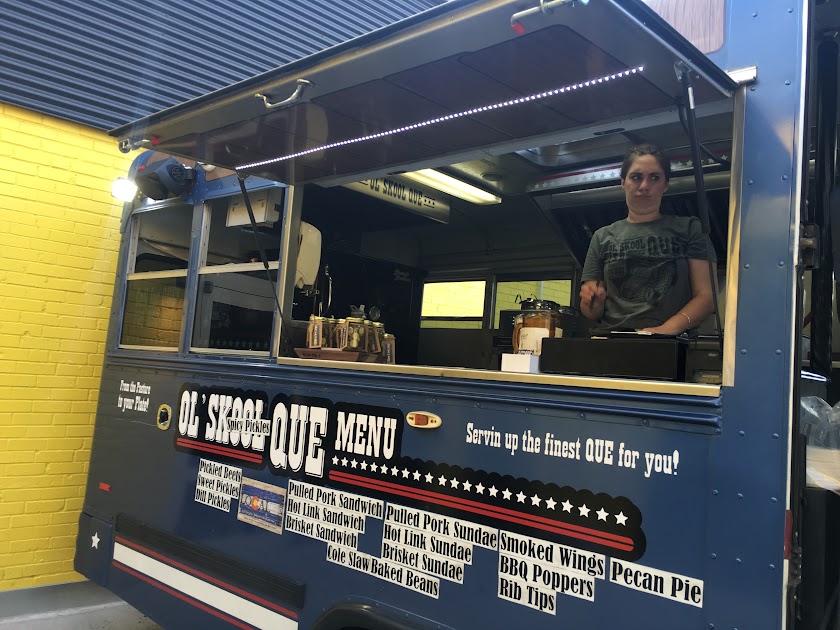 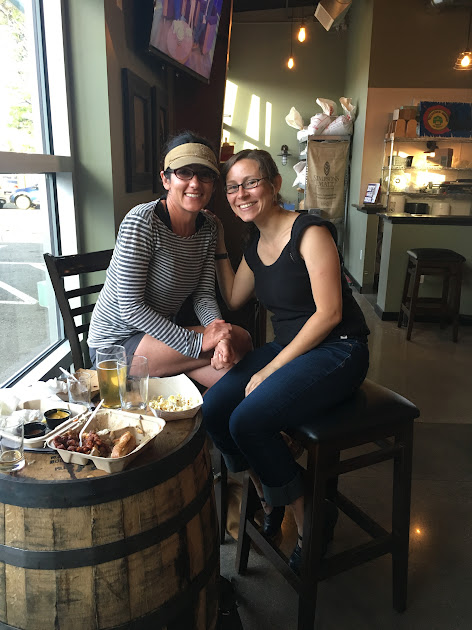 Yana and I were the first two people assigned to our 2008 effort to elect President Obama and progressive candidates down the ballot, so we reminisced about those crazy first few weeks and the barely comprehensible mathematic equations we came up with to choose which states to target.  Clearly our equations are responsible for the past eight years of increasing prosperity--so we've got that going for us.
Posted by arl at 4:09 PM